How Will China’s Next Steps Affect Brazil? 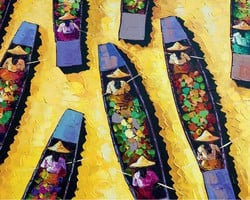 China’s economic growth slowdown could have a negative impact on many countries – and on the BRICS economies. For Brazil, however, this may create a world of possibilities, provided the South American giant is able to take full advantage of them.

China has been one of the growth engines of the global economy, with a growth model driven by exports and investment, which has favored commodity exporters like Brazil.

But this growth model is proving to be unsustainable in the medium and long term. As China attempts to transform its growth model, the local economy is losing steam. Looking ahead, it seems that Chinese growth might be lower than in the previous decade and could be driven by increases in household spending. This shift in demand patterns will have a negative impact on the prices of international commodities, including those exported by Brazil.

The Chinese contribution to external demand for Brazilian products will be smaller. However, the outlook for a weaker Brazilian real and a stronger renminbi implies a reduction of wage differentials, which could be favorable for Brazilian manufacturers. Therefore, this new growth model in China creates growth opportunities for other segments of the Brazilian economy, especially if Brazil resumes its productivity gains, narrowing the current cost differential between the two countries.

How China has impacted Brazil
since 2000

The Chinese economy expanded at a brisk annual rate of 10.7% between 2001 and 2008, boosted by exports and investments, while domestic consumption expanded more slowly than GDP. With its economy growing at dizzying speeds, China’s weight in the global economy soared to 11.6% in 2008 from 7.0% in 2000.

A weaker Brazilian real and a stronger renminbi, as well as sustained wage growth in China, suggests that the wage differential in US dollars will continue to decline, creating an opportunity for Brazilian manufacturers to become more competitive abroad. To reinforce this tendency, Brazil must increase its productivity and reduce the so-called ‘Brazil cost’

Brazil and other commodity exporters benefited from this price movement. Starting in 2002, Brazilian exports increased substantially, ensuring trade-balance surpluses. In six years, Brazil’s trade surplus widened to $40 billion from $2 billion. This expansion was largely driven by China’s impact on Brazilian export prices and volumes, with iron ore (which is combined with coal in steel production) and soybeans standing out.

Despite this significant growth, the Chinese model looked unbalanced and unsustainable from numerous perspectives. Investment, already topping 50% of GDP, could not keep growing more quickly than the rest of the economy. China’s size compared with other countries would clearly make it difficult to sustain export-led growth. Moreover, China’s industrial sector already accounted for a hefty share of its GDP, while outstanding loans, as a share of GDP, kept growing.

The response to the 2008 crisis deepened these imbalances and reinforced the limitations of a model biased towards investment and exports. The Chinese government gradually came to recognize the need to rebalance the economy by boosting the role of consumption and the tertiary sector. In speeches and five-year plans, Chinese officials began to express an acceptance of lower GDP growth rates, as long as the lower growth came with a more sustainable profile.

It seems that the transition in China’s growth model is likely to continue in the coming years, with growth rates gradually converging to approximately 6.0% by the end of the decade. The slowdown will be sharper for investment, while household consumption will probably sustain the growth pace seen over the previous decade. This process will require an increase in household income as a share of GDP.

Considering the economic slowdown and the current rebalancing, we estimated the impact of this scenario on demand and on international prices for metals and agricultural commodities. The outlook for sustained real growth in household income suggests that growth in agricultural commodity demand will remain high in the years ahead. In turn, the slowdown in investment may lead to deceleration in demand for metals.

A knock-on effect in Brazil

Brazil benefited from the export- and investment-driven Chinese growth model. Slower growth and demand rebalancing in China will likely have negative impacts on some key sectors of the Brazilian economy, but it may also create opportunities for other segments.

Despite the significant growth, the Chinese model looked unbalanced and unsustainable from numerous perspectives. Investment, already topping 50% of GDP, could not keep growing more quickly than the rest of the economy. China’s size compared with other countries would clearly make it difficult to sustain export-led growth 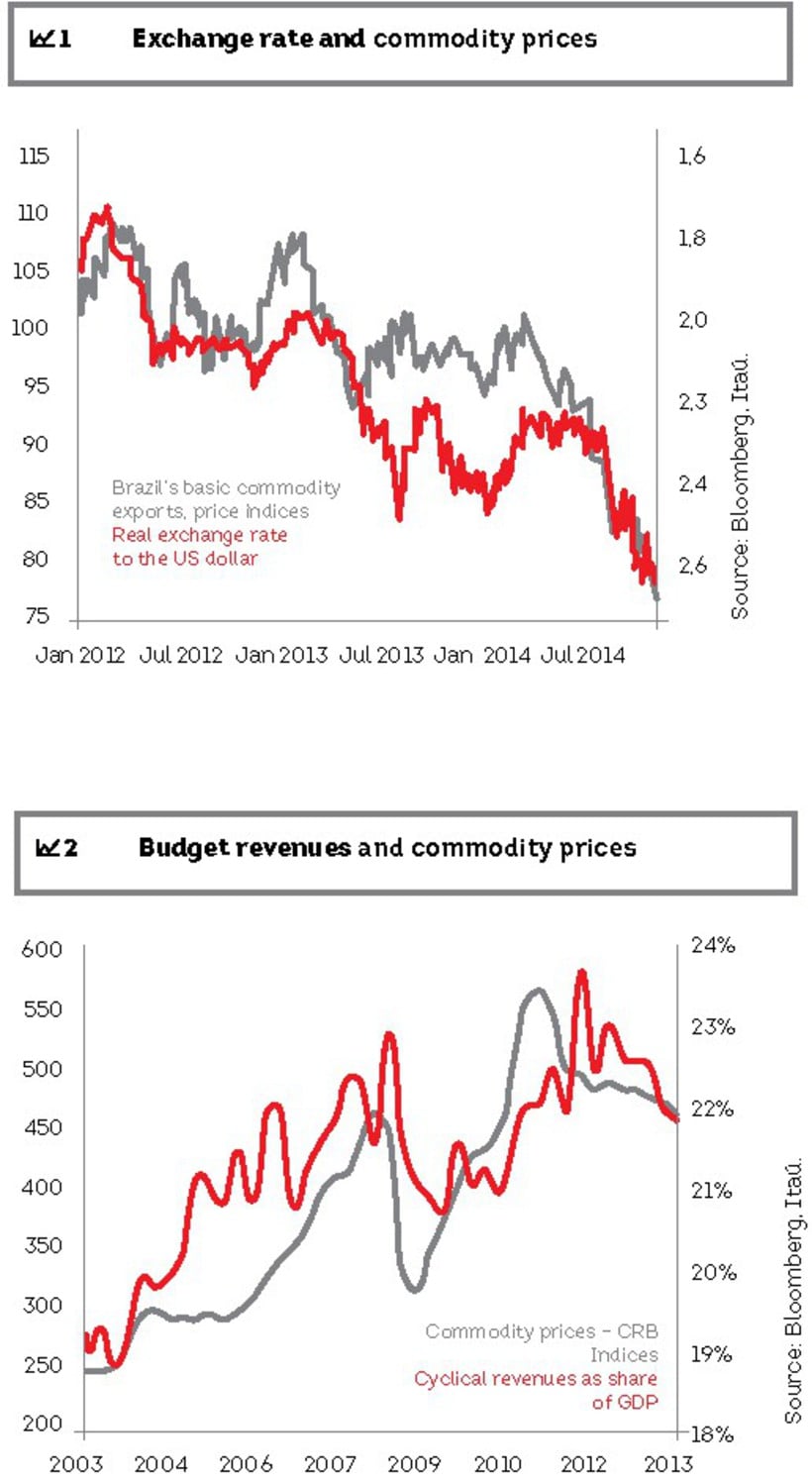 While Chinese growth will probably be less investment-driven, the increase in available household income resulting from the rebalancing process is set to continue boosting Brazil’s soybean exports. We see a significant, positive long-term correlation between Brazil’s soybean exports and soybean consumption in China, a correlation that is not visible for soybean consumption in the rest of the world. Hence, although the slowdown in investment in China will likely have a negative impact on the volume of iron ore exported from Brazil, Brazil’s soybean shipments are unlikely to suffer as much, due to the expected increase in available income among Chinese households.

In addition to affecting exported volumes, the rebalancing in China will also affect international commodity prices, trickling down to the value of exports and the exchange rate in Brazil. Higher export prices are favorable for the terms of trade, translating into a larger trade balance and an injection of foreign resources, which tends to trigger currency appreciation. That was the case between 2003 and 2008 and between mid-2009 and 2011.

shows the strong positive correlation between international commodity prices and the exchange rate, as price increases for the most important commodity exports create pressure for currency appreciation. In the coming years, lower commodity prices will likely exert some pressure in the opposite direction, towards currency depreciation.

Higher commodity prices also have a materially positive impact on the Brazilian economy, mainly through the fiscal channel. 2 and 3 show that increases in commodity prices and export prices have indeed been followed by increases in cyclical fiscal revenue. Although other industries also grew during this period and contributed to this trend, it is undeniable that commodity-related industries have an important role in the Brazilian economy and have been partly responsible for the increase in tax revenue.

In economies with significant commodities-exporting sectors – economies like Brazil’s, with nearly 40% of total exports concentrated in basic materials – terms-of-trade fluctuations can be a key influence on fiscal revenue. In the case of Brazil, regardless of the transmission channel, increases in commodity prices apparently lead to higher government revenue, which is then passed through to the rest of the economy in the form of increases in public spending and transfers, expanding aggregate demand and generating faster economic growth. In 2014, Julia Gottlieb and Ilan Goldfajn estimated that international commodity prices (as measured by the Commodity Research Bureau) rose by 42% between 2004 and 2008, boosting tax revenue in Brazil by 11.4% over this period. Consequently, they estimated that Brazil’s fiscal revenue as a share of GDP grew by 0.6 pp due to higher export prices.

Investment growth in Brazil has long been tightly correlated with the commodity cycle, for several reasons.

First, higher international commodity prices increase the returns on projects that are directly or indirectly associated with the commodity sector, fueling more investment. Second, currency-appreciation moves associated with high commodity prices tend to lower the prices of imported capital goods. Third, the improvement in external accounts resulting from gains in the terms of trade reduces the risk premium demanded by foreign investors, thus reducing capital costs for Brazilian companies. Conversely, the opposite effects hold true when commodity prices decline. According to our estimates, every 10% drop in commodity prices leads to a slide of 1.2% in gross fixed capital formation in Brazil, all else being equal.

In spite of the potential negative impact on trade balance and capital expenditures, the rebalancing in the Chinese economy presents an opportunity for Brazilian manufacturers. In recent years, wages in China’s industrial sector have been rising by more than 10% per year (in US dollars), narrowing the gap with wages paid in Brazil.

The prospect of a weaker Brazilian real and a stronger renminbi, as well as sustained wage growth in China, suggests that the wage differential in US dollars will continue to decline in the coming years, creating an opportunity for Brazilian manufacturers to become more competitive abroad. To reinforce this tendency, Brazil must increase its productivity through additional investment in both fixed capital and worker skills and through reforms, thereby reducing the so-called ‘Brazil cost.’

All in all, we expect the Brazilian economy to benefit less from Chinese external demand and international commodity prices than it did in the post-crisis period. Falling commodity prices could have a negative impact on trade, fiscal revenues, and investment in Brazil. Still, China’s new growth model, being more driven by the domestic market, creates growth opportunities for other economic sectors in Brazil. Resuming productivity improvements in Brazil is vital to reducing the cost differential between the two nations.