Structural oversupply coupled with low economic growth rate has created the conditions under which the Russian wagon-building industry is to exist in the coming years. To counteract the negative environment, the Uralvagonzavod freight wagon manufacturing company, part of Rostec, is targeting new market segments and changing the quality of their service by promoting full life-cycle contracts. 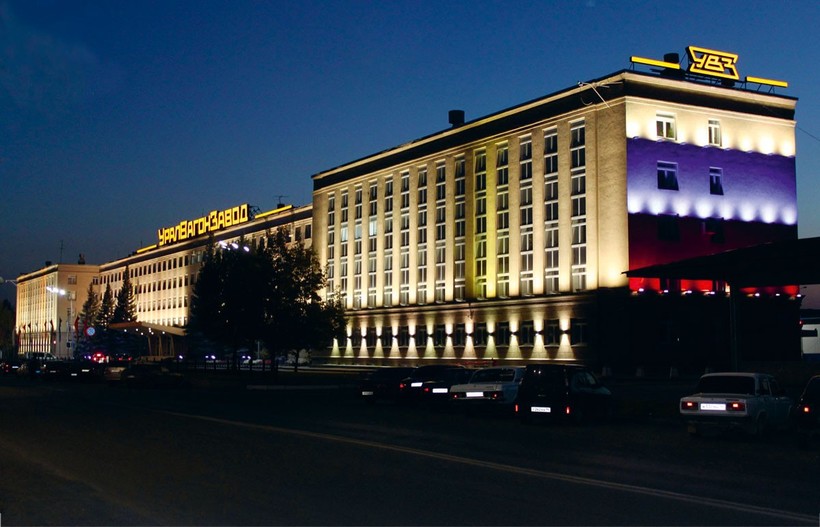 Changes on the Russian wagonbuilding market over the past decade and a half (since the most recent railway transport industry reform was launched) suggest an analog y that is far from straight as an arrow. It is more like a roller coaster or a swing, where a change in position can be compared to the fundamental change in the market environment for transport companies and rolling stock manufacturers. According to the Institute for Natural Monopolies Research (IPEM), 2011–2012 was an important milestone for the industry: there was no longer an inventory of wagons and all commercial transport operations had switched over to a private wagon fleet. “At that time, the rates for providing rolling stock were rising, a lot of railway wagons were supplied to the railway network, and manufacturers invested in expanding their capacity to meet the demand,” IPEM said. That period favoured manufacturers in what was essentially a seller’s market. Yet, by 2013–2014, the market situation had reversed.
Previous large-scale wagon purchases led to a surplus of rolling stock. Rates of provision and leading, as well as demand for new wagons, fell, and manufacturers had to hastily cut and even phase down production. As IPEM stated, the market passed over to the buyers. The dramatic decline in the industry forced the government to intervene. In particular, a government decree introduced mandatory certification when extending the service life of wagons in order to push operators to renew their wagon fleet more actively and, since 2016, there has been a de facto ban on operating most types of rolling stock after the service life set by the manufacturer expires. In fact, the measure led to a massive writeoff of outdated rolling stock of around 215,000 wagons over two years, supporting the demand for new freight wagons.
Again, for a short time, there was a seller’s market. Manufacturers of freight wagons actively increased supplies, which resulted in an increase in the number of freight wagons in Russia by more than 55,000, up to 1.168 million, which exceeded the 2012 figure. The same year marked an absolute production volume record, with a total of 79,600 freight wagons of various modifications produced in Russia.
However, by the second half of 2019, the market swing was reversed. “High growth rates of the fleet on the railway infrastructure, combined with other negative factors, including a significant drop in global coal prices, created a new environment on the railway transportation market: the rates for provision and leading fell for certain types of rolling stock, including open wagons,” explains IPEM. 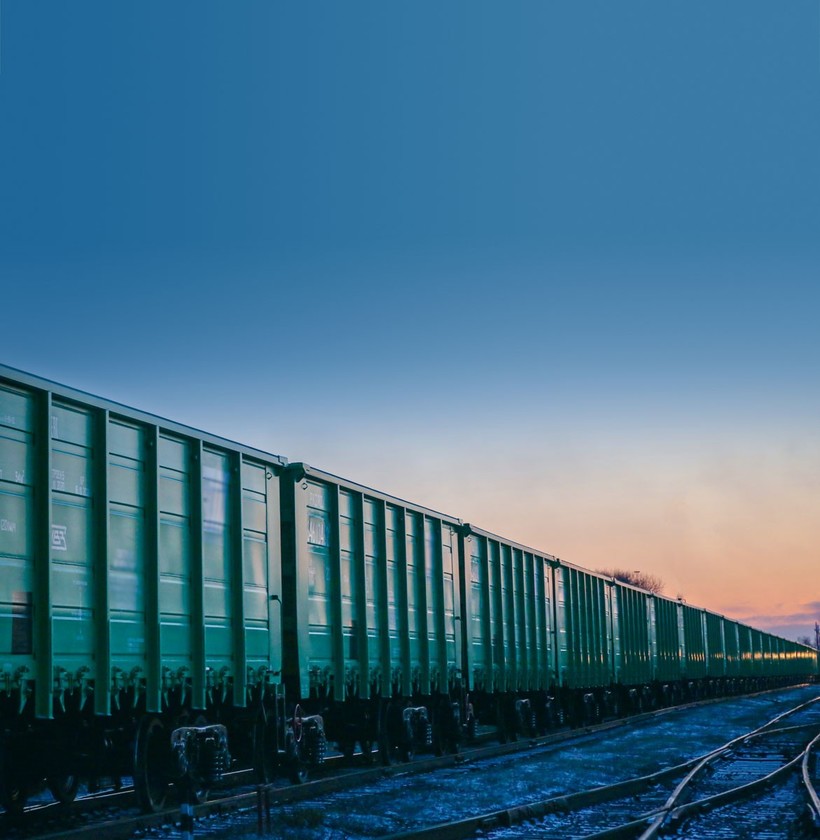 TRAFFIC JAM ON THE NETWORK
To some extent, the dramatic decline in economic activity last spring and summer following the onset of the coronavirus pandemic only reinforced the trends already emerging. No disaster occurred with traffic volumes. Last year, Russian Railways freight turnover, including the empty run of wagons, fell by only 2.6%, to 3,220.6 billion tonne-kilometres. The network load fell by about the same amount – 2.7%, to 1.234 billion tonnes. Loading of oil, petroleum products and ferrous metals fell the most, by about 10% year-on-year, to 208.8 million and 66.4 million tonnes, respectively. In contrast, grain shipments rose the most – by 28.7%, to 27.9 million tonnes. While transportation was almost unaffected by the pandemic, railway rolling stock manufacturers were more sensitive, with a decrease of around a third in deliveries to the market.
According to Infoline, in 2020, production of wagons by Russian manufacturers fell by 28.7%, to 56,200 units. This included wagons supplied to Russia and the ‘1520 space-friendly’ countries, with a track gauge of 1520 mm, as in Russia. The most massive segment, that of open wagons, was affected most, with a 42.2% reduction in deliveries owing to a persistent significant surplus in supply, of 21,800 units. Purchases of fitting platforms for the transportation of largetonnage containers fell by 21.3% to 11,900 units; grain carriers by 21.9% to 7,000 units, given that 22,900 freight wagons of various types were decommissioned as planned during the year. Both leaders of the Russian industry showed signicantly reduced production. United Wagon Company (UWC) shipped 16,600 wagons to customers in Russia and the 1520 space, which is 20% less than in 2019. Uralvagonzavod (UVZ) reduced production by about 40%, to 10,700 units.
Without ignoring the obvious problems, UVZ says they were nevertheless able to achieve their corporate objectives, despite the negative market environment. “Last year, the plant’s revenues from sales of civilian products amounted to 40 billion rubles. Last year’s plan was fully implemented, in spite of the objectively unfavourable circumstances caused by the pandemic and oversaturation of the Russian market for open wagons,” says Boris Myagkov, Deputy General Director of UVZ.
According to the top manager of UVZ’s civilian product line, since last spring, the Russian wagon eet has been overowing: there are about 1.2 million wagons in the network, while the surplus of open wagons alone is estimated at 70,000–100,000 units. At the same time, the share of recently produced rolling stock is still high.
“So, we do not expect the situation from 2015 to recur, when a service life extension procedure for wagons was enforced and rental rates rose once the outdated wagon had been written off,” explains Myagkov. Yet, the search for alternative industry support measures is still under way. Last summer, UVZ suggested a trade-in programme launch initiative to the government. Under the proposal, an owner would receive one new innovative gondola wagon for three open wagons with a residual service life of 3-6 years. The total cost would be reimbursed in equal shares by a government subsidy and the residual value of the scrap. 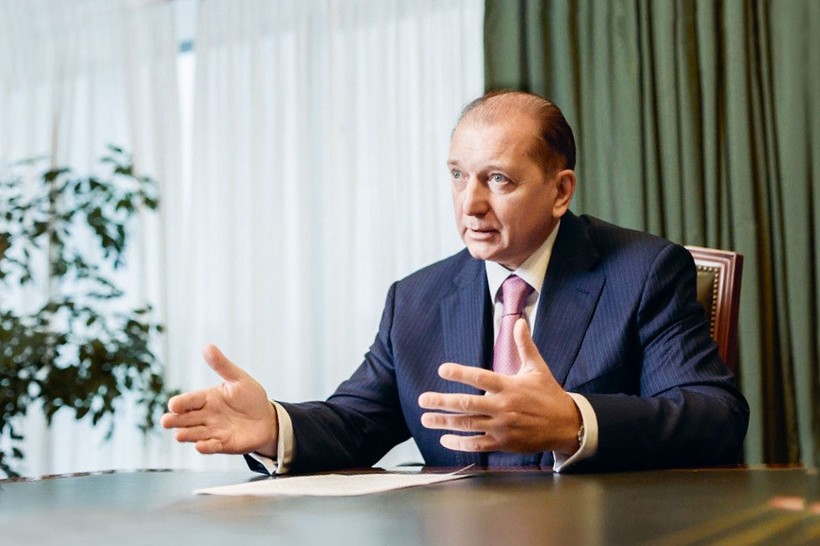 “In 2020, the Russian and global economies faced serious challenges, and unified efforts by the government and business will be required to overcome them. The wagon building industry must definitely take over as one of the key drivers of economic growth. The sector features a high level of internal cooperation and a strong ability to leverage related industries. It is currently of particular importance to respond promptly to industry risk factors, and develop and promote effective measures in a timely fashion to adapt to volatile market conditions. It is also vital to drill specifically into ways to boost exports. Reaching new heights in wagon building, it is important to try new approaches, as well as to focus on exchanging technology and experience that is valuable to all parties involved.”
VLADIMIR ARTYAKOV, Senior Deputy General Director at Rostec State Corp
It is estimated that the launch of the programme will increase the write-off of gondola wagons by up to 17,000–26,000 units a year through 2025. By then, the surplus should be reduced to about 24,000 pieces, while demand for innovative wagons should go up by a third. In November last year, a special meeting with Deputy Prime Minister Yuri Borisov in attendance and other measures to support the industry were on the agenda. Yet, no specific decisions have been made since then.
One way or another, UVZ representatives insist there is a need to further update the freight rolling stock to expand the capabilities of the current railway infrastructure. “We still believe that new wagons built on outdated bogies create congestion in the network. So, we believe that restrictive measures with respect to some of the least efficient types of rolling stock are long overdue. We hope for a positive resolution of this matter,” notes Myagkov.
Such measures would provide considerable support to manufacturers of modern technology, including UVZ, where almost half of sales are of innovative wagons of various modifications – hoppers, dump wagons, platforms and tanks. In March, the company shipped to the customer the 40,000th innovative 12-196-02 open wagon on innovative bogies with an increased axle load. 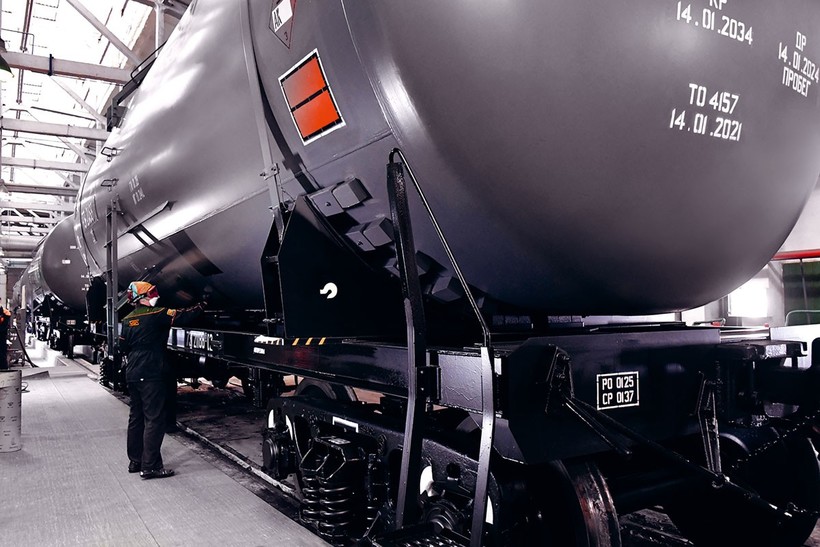 THE HIGH LOADING LEVEL
The stake on innovative technology is an opportunity to earn and develop even given the surplus supply of railway equipment, which will remain in the coming years, as the company itself admits. “The surplus does, indeed, exists and the natural retirement of wagons at the end of their service life will be minimal in the next few years. In this situation, it is difficult to expect large orders, so we are focusing on production of the most efficient equipment for the owner in terms of economic parameters – for example, the ability to carry more freight,” says Myagkov.
Such equipment will be in demand and will oust outdated wagon models from circulation as being uncompetitive on certain routes. Even with a surplus, the demand for such equipment will still be there.” Despite all the market complexities, the company has coped with the current challenges and has secured foundations for the future. “Since last September, when I was entrusted with production capacity load matters, we have produced more than 10,000 wagons and signed a number of new contracts. I estimate the current load level as high,” notes Myagkov.
In total, the company expects to produce 15,000 open wagons this year, 43% more than last year. “We believe that open wagons will always be in demand, and we are able to sell 6,000–8,000 units in any market conditions, as replacing inefficient old-generation wagons with new ones is inevitable.”
At the same time, the company does not intend to confine itself to traditional markets; it is getting ready to expand into promising new segments. One of UVZ’s priorities is to re-orientate some production capacity to fitting platforms for containers. “The market has now shifted considerably towards container transportation, some even want to use containers to transport coal,” explains Myagkov, “so we expect growth in demand for platforms from Russian operators in the coming years. Unlike the market for open wagons, which will not recover before 2030.”
Implementation of big transport infrastructure projects in Russia planned for the next few years could also drive the demand for rolling stock. These include plans to modernise the TransSiberian Railway. “By all means, expansion of the carrying capacity on the Transsib will play a role. In this case, we expect an increase in coal traffic and in the demand for open wagons,” explains Myagkov.
Although UVZ does not expect explosive growth of its business, it is counting on opportunities to develop and produce new equipment. In particular, expecting an increase in container traffic, the company intends to stake on refrigerated containers. UVZ are preparing for serial production of them right now.
“The Russian market has serious potential for refrigerated containers, owing to the urgent need to transport fishery products from the Far East,” Myagkov says.
The company has not yet mentioned the possible target demand values for this type of equipment. However, they say the market is still far from saturated: while there are about 2 million refrigerated containers in operation globally, in Russia there are no more than 5,000. Finally, in addition to revising its product portfolio, the company is modifying its approach to creating the end product for operators, particularly by promoting their products on the market through full lifecycle contracts. Depending on the conditions, the wagons are sold with maintenance and repair obligations throughout their entire service life.