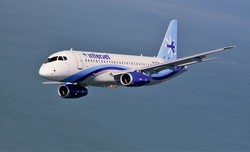 Despite empirical difficulties and challenging circumstances affecting the global markets, the Russian aircraft industry has managed to achieve lift-off. Thanks to the United Aircraft Corporation (UAC), the manufacture of a new family of civil aircraft has been launched in Russia.

The United Aircraft Corporation managed to collect the best aircraft building enterprises in Russia, including such brands as Sukhoi, Ilyushin, Tupolev, Irkut, and many others. Today UAC is one of the largest civil and military aircraft makers in the country and around the world. In 2014, a total of 159 aircraft were shipped to customers, which placed the corporation squarely among the world’s largest public companies according to Forbes magazine.

One simple fact clearly illustrates how successful UAC’s development has been. The share of civil aircraft in the company’s sales portfolio, which until recently was dominated by military aircraft, is now steadily on the rise. UAC’s latest successes, such as the medium-haul Sukhoi Superjet 100, have been a factor that cannot be underestimated.

This particular jet, designed and built from scratch in Russia, is a trailblazer in many respects. For instance, the point of departure for designing this civil aircraft came in the form of product requirements formulated by the world’s leading air carriers. It should be noted that apart from the technical specifications and a business plan, the successful bidder also had to present a concept of after-sale services. The materials and designs behind the SSJ100 jetliner have never been used in the Russian aircraft industry before, including its jigless assembly technology, a wing panel and wing coupling with no manual adjustment, and automatic riveting, just to name a few innovations.

As a result, UAC’s companies managed to create a jetliner that offers state-of-the-art aviation technologies in combination with a high level of passenger comfort, significant economic advantages for airlines, a comfortable environment for the crew, and cutting-edge environmental protection indicators.

The key competitive advantage that the SSJ100 offers is its low fuel consumption per passenger compared to other rival aircraft. The jetliner also makes it possible for airlines to optimize operational costs by way of ensuring greater fuel efficiency and lower take-off weight. The SSJ100 operational data shows that its cost of ownership is 15% to 20% lower than other aircraft of the same class. Last but not least, the company managed to offer a competitive leasing rate for its buyers, which makes it significantly easier to finance the purchase of these jetliners.

Therefore, it is hardly an accident that the SSJ100 managed to find a niche in the market in such a short time. Suffice it to say that four years after the model went into serial production, the jetliner has become a veritable flagship of Russian aviation with over 100,000 hours of commercial flights already logged. All in all, 50 SSJ100 jetliners of various configurations and modifications are servicing 130 destinations around the world.

Russia, Mexico, and Around the World

Aeroflot, Russia’s national carrier, has become the first core customer to order the SSJ100. As of today, the airline has already purchased 20 of these jets to service a broad variety of destinations in Russia, Belarus, Germany, Lithuania, Croatia, Romania, Latvia, Estonia, and Ukraine. By 2017, the fleet of SSJ100s operated by Aeroflot is expected to reach 50 aircraft.

Russia is certainly not the only country to use the SSJ100. Interjet, a Mexican airline, has become the largest overseas customer. It operates 15 jets that were assembled at the aircraft plant in Komsomolsk-on-Amur and customized at the completion center in Venice.

The policy of setting up specialized service and sales support centers is another factor that makes the new Russian regional aircraft more attractive. Negotiations are already underway to set up similar service facilities in Vietnam and Egypt.

The company is also engineering a breakthrough in the promising Asian market. For instance, a framework agreement was signed last spring to set up a leasing company to support SSJ100 sales in China and Southeast Asia. The four parties to sign the agreement included the Russian-Chinese Investment Fund, Sukhoi Civil Aircraft (a Russian company that forms part of UAC), the Xixian New Area Administrative Committee (PRC), and New Century International Leasing (a Chinese company). The deal also received significant backing from the Russian-Chinese Intergovernmental Commission.

In accordance with these agreements, the Russian-Chinese leasing company is set to purchase up to a hundred SSJ100s in the next three years from Sukhoi Civil Aircraft for a total of $3 billion. The new leasing company will be headquartered in the Russian-Chinese Industrial Park in Xi’an (in the province of Shaanxi, which has become the capital of China’s aviation cluster). The city administration will also provide assistance by allocating sites for the required infrastructure to receive and service SSJ100s.

“The agreement that has been signed is one of the ways to respond to our main challenge, which is to rethink our approach to promoting SSJ100 in international markets. The agreement was reached in the shortest possible timeframe and our Chinese counterparts deserve a special word of thanks for that,” said Yuri Slyusar, UAC’s CEO commenting on this event. “The agreement to set up a Russian-Chinese leasing company is a historic milestone, both in terms of its scope and the new prospects it ushers in for our domestic civil aircraft industry. Together with our Chinese partners, we will formulate a competitive leasing offer that will enable the SSJ100 to gain a foothold in the rapidly growing aviation markets in China and Southeast Asia.”

At any rate, the SSJ100 is not the only strategic project in the civil aviation sector that is being pursued by UAC. The corporation is also working hard to develop a new family of MS21 regional jetliners with 150 to 210 seats. UAC already boasts a portfolio of orders and requests totaling 175 MS21 aircraft. Markets overseas are showing a great deal of interest as well.

Yuri Slyusar believes that overall, selling hundreds of aircraft in the global market will be a perfectly attainable target for UAC in the near future.

A Star on the Wing

Fast-tracking the development of UAC’s civil segment does not necessarily mean that the company is going to loosen its grip on the military domain, where Russian aircraft builders have traditionally shown strong performance. Su and MiG fighter jets are well known around the world and are used by many countries’ militaries. Still, the line of military models is constantly being upgraded, and orders are already being fulfilled and new contracts are being signed for the fourth generation of Su-30 and MiG-29 fighters, as well as Yak-13 military aircraft for training purposes.

The eyes of the world’s armed forces and experts are now on the Advanced Frontline Aircraft System’s T-50, which is currently undergoing trials, as well as on the Su-35C fighters that are already used by the Russian Air Force. In addition, UAC is continuing joint projects with its long-time partners in India to build a fifth generation FGFA fighter and MTA transport aircraft.

In the meantime, UAC continues striving to upgrade its products and improve its efficiency. In the words of Yuri Slyusar himself, “thanks to technological upgrades, the corporation’s enterprises increase their productivity by 15-20% every year.” Analysts believe that in the next 10 years, the Russian manufacturers operating under the UAC brand will become the third largest player in the global aviation market. This ambitious goal no longer appears unattainable.