The second advent of Mahathir Mohamad 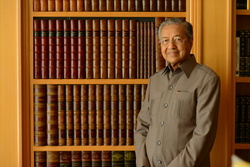 At age 93, he is the oldest acting head of state on the planet. He is Prime Minister of Malaysia Mahathir Mohamad, who after a 15-year hiatus returned to power in an effort to change the model of governance that he himself once created.

Parliamentary elections in Malaysia in May of this year caused a sensation when the Alliance of Hope, a coalition of opposition parties, defeated the National Front, whose representatives had ruled the country for the last 61 years. The Malaysian prime minister’s seat fell to the Alliance of Hope leader, the 92-year-old (at that time) Dr. Mahathir Mohamad, the former prime minister and a political giant whose name is associated with an entire era of Malaysian history. One need only recall the economic miracle he worked in his previous term as prime minister, from 1981 to 2003, when he turned Malaysia from a commodity-focused power into a high-tech exporter and took his place alongside Lee Kuan Yew and the other creators of the Asian Tigers.
At the same time, for all the services rendered, Mahathir Mohamad remains a controversial figure. When he retired in 2003, he joked: “This is the first time in history that a dictator has resigned while still in good health.” In January 2018, however, he made a serious admission on his blog: “Looking back now, I realize why, as Prime Minister of Malaysia, I was described as a dictator. There were many things I did which were typically dictatorial.”
There are many reasons for such statements. “There was democracy in Malaysia, but a very timid one, where the press agreed with almost everything the government said. Those who spoke out in opposition could find themselves behind bars without trial or investigation,” the English Times wrote. These powers were granted to the head of state by a law introduced by the British colonists in the Internal Security Act. Hundreds of opposition politicians, scientists, and activists are believed to have experienced its effects firsthand.
It is well known that he could take tough economic decisions without hesitation when necessary. In this way, Mohamad was able to freeze the exchange rate, close the banks, and organize an attack on the stock exchange.
As a leader serving a Muslim population base, he did not show himself to be particularly tolerant. “I am glad to be labelled anti-Semitic. How can I be otherwise, when the Jews who so often talk of the horrors they suffered during the Holocaust show the same Nazi cruelty and hard-heartedness towards not just their enemies but even towards their allies should any try to stop the senseless killing of their Palestinian enemies,” he said in 2003. These words followed the case, widely publicized at that time, of an Israeli soldier bulldozing a Palestinian house in the Gaza Strip who ran over an American activist trying to stop the demolition. The Israeli court acquitted the serviceman, ruling that he had not seen the American.
Comments of this sort fall far outside the global political mainstream. In order to understand the current Malaysian leader and his rhetoric, his ‘typically dictatorial’ deeds, and the economic results he achieved, one must understand where he comes from.

The Doctor from the Ghetto

Mahathir Mohamad was born into the family of a school teacher on 20 December 1925 in the town of Alor Setar in the Malaysian state of Kedah. He is descended on his father’s side from Tamil immigrants from India, and his mother was Malay.
When the British were expanding plantations and actively building their mines, they found that they lacked local workers, while those they did have were not particularly eager to descend underground with a pickaxe. They solved the problem by importing Chinese, Indian, and even Javanese workers. One of the consequences of this policy was the beginning of a serious stratification within society: The wealthy and middle classes included many enterprising Chinese and Indians, and the indigenous population felt unjustly deprived of their rightful share. Mohamad appears to have been exposed to his share of this sentiment as a child, considering himself Malay and coming to power as their defender.
One thing is certain: His childhood cannot have been easy. During the Great Depression of the 1930s, he had to fend off starvation several times. During World War II, Malaysia was occupied by the Japanese, and schools were closed. To survive, the future politician began to trade coffee and then snacks from a hawker’s tray, primarily deep-fried bananas, a traditional Malay treat.
After the war, with the help of his parents, he managed to save enough money to pursue a decent education. In 1953, he received a medical degree from the University of Malaya and settled in Singapore. During his studies, Mohamad met his future wife, Siti, to whom he is still married and with whom he raised seven children, including two adoptive children.
Mahathir recalled that it was not love at first sight but that the relationship began to develop later. “She was the only girl among the students from Malaysia. There were six more guys, and they always offered to carry her backpack,” he later recalled. “I grew up in a family made up mostly of men and did not know how to attract the attention of girls. I looked at my friends [...] and also began to offer to carry her backpack. But I always helped her [with lessons]; maybe that’s what brought us together.”
They got married in 1956, when Mahathir was 30 and Siti 29, following her father’s demand that she first receive her diploma and finish her internship. A year later, he stopped working for the state and opened a private practice.

A Time of Reforms

“I never truly retired,” Mohamad later admitted. After 2003, he travelled around the country, speaking for other people’s election campaigns and maintaining contact with politicians of different persuasions. His protégé, new Prime Minister Abdullah Ahmad Badawi, began to disappoint Mohamad. After the early parliamentary elections in 2008, when the ruling UMNO achieved lackluster results, the former prime minister quit the party in protest. Badawi was unable to withstand the pressure and resigned the following year.
Mohamad returned to the party and. in the power struggle around the position of prime minister, threw his support behind Najib Razak, son of the country’s second prime minister. He won the fight. But that turned out not to be the best choice, either. After coming to power, Najib created the sovereign investment fund 1Malaysia Development Berhad (1MDB). Funds were supposed to go to the development of the economy. But in 2015, scandals started cropping up concerning theft from the fund – it is suspected that at least $4.5 billion disappeared. Investigations are still being conducted from Malaysia to the US, from Singapore to Switzerland. Even Western tabloids began to write about the affair, especially when the names of celebrities started to pop up. For example, in 2017, actor Leonardo DiCaprio passed along a gift, a painting by Pablo Picasso, to the US authorities from Malaysian businessman Joe Lowe. The US Justice Department suspected that Lowe bought it with money from 1MDB.
In 2015, Mohamad demanded that Najib resign. He refused. Then in 2016, the former leader left the party again. “The UMNO no longer exists,” he explained. “The party works only to protect Najib. I cannot be a member of such a party.” This year, Mohamad took part in the elections in an alliance with the opposition and became a deciding factor in its victory.
Not only is he extremely popular in the country, but Mohamad also managed to neutralize Najib’s main trump card, a campaign seeking to show that the opposition was not Muslim and that victory would lead to the ousting of the Malay from power. Mohamad is well-known for striving to protect the indigenous population and managed to convince people that the coming of the opposition would not turn life in the country upside-down.
The first two days after the victory of Mohamad’s coalition were declared holidays. Banks were closed, and it was impossible to withdraw money from them. Meanwhile, the new-old prime minister began to tackle the scandal with 1MDB. Najib was immediately interrogated, and the police carried out searches in property belonging to him and members of his family. From one apartment alone, 284 ladies’ luxury handbags, 37 more bags with jewelery and expensive watches, and another $28.6 million in Malaysian ringgit, US dollars, and 24 other currencies were confiscated. It took three days to count all the money.
It is suspected that the Najib clan received more than $700 million stolen from the 1MDB fund. Mohamad promised to lay off many of the 17,000 officials appointed under Najib, suspecting them of corruption and of having been appointed unfairly as a result of connections. He announced the cancellation of the six percent tax on goods and services introduced in 2015.
Mohamad has also had to deal with unexpected discoveries. Najib’s government had declared debt to equal $170 billion. After revaluation, however, it grew to $250 billion, or 80% of the country’s GDP. “The more we find out about the affairs of the previous administration, the more bad things we turn up,” Mohamad said in conclusion. He has a strategy for the development of the country: In 1991, he introduced the Vision 2020 plan (in 2009, it was corrected and named ‘United Malaysia’). He decided to see to its implementation personally.
Whatever the case, Mohamad has changed in 15 years. “He used to think only about the centralization of power in the hands of the prime minister,” Malaysia native, James Chin, director of the Asia Institute at the University of Tasmania, told the New York Times. “Now he has realized that independent institutions are not such a bad thing.”