Umberto Eco on one of history’s driving forces 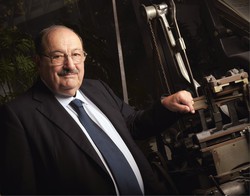 Medievalist, novelist, and renowned public intellectual, Umberto Eco’s most recent novel Numero Zero will be published in English in November 2015. A regular contributor to Italy’s L’Espresso magazine and La Repubblica newspaper, his new work of fiction delves into the mass media’s truths and lies.

Do you still read a lot of newspapers?

I read at least two papers every morning and I scan a much larger chunk of the press each day. I can’t have my coffee or start my day without diving in. I still ascribe to Hegel’s idea that reading the newspapers is the “daily prayer of modern man.” I am also a contributor – I write for a daily newspaper and a weekly magazine. But I don’t often venture far past the headlines, because the press is always desperately trying to repeat all the information that was revealed the prior day.

Repeating information without adding depth – is this what’s threatening the daily press?

The press is still breaking its back to reclaim, without adding any great value, the same news that is being broadcast in a loop on radio and TV news stations. It’s a major crisis that dates back almost to the birth of television.

Should the press do more to keep critical thinking alive?

We are witnessing the extinction of militant criticism. Yes, we have to rehabilitate criticism in journalism, and widen its scope – notably to include the Internet. Newspapers should be dedicating one or two pages to criticizing websites – pointing out both the imposters and the blogs you can trust. We shouldn’t renounce the role of forging the public’s taste. The newspaper can be a critical filter and remain democratic.

Is the concentrated ownership of the press by a few big groups also dangerous?

The concentration of the press is a genuine problem. In Italy, all the papers depend on multiple industrial enterprises or powerful banks. France finds itself in a similar situation. As such, we need to install strong leadership at the head of newspapers to resist certain pressures.

“You have to speak the language of the reader, not that of intellectuals,” says the newspaper boss in your novel. But shouldn’t we also be critical of our own readers?

Either you try to construct your reader, or you follow his assumed taste based on opinion studies. Eugène Sue would give his readers what they wanted; Balzac forged his readers’ tastes by offering stories with situations and styles they hadn’t imagined. Some books say, “I’m like you.” Some say, “I am different.” We need to avoid the homogenization of style that we are witnessing, and which is even required by the new media industry.

And what about clichés?

In my book, I had a good time making a list of all the clichés that rule the press. And even journalists at the ‘good’ papers admit that these clichés dominate their papers as well. It’s a form of laziness. Literature is said to serve the purpose of keeping a language in use. The press should have the same goal. Clichés paralyze the language.

You are fascinated by the conspiracy theories that are circulated on social networks. Why is that?

I belong to an association that tries to fight occultism and conspiracy theories. That being said, falsehoods fascinate me. This is why I collect books that were wrong. I don’t have Galileo in my library, but rather Ptolemy – because he was wrong! I also like alchemists and magicians. What characterizes semiotics – our capacity to produce signs and symbols – is not so much how we tell the truth as much as our ability to lie. A letter by the preacher John, circulated in the 12th century, described a fabulous kingdom ruled by a Christian king somewhere in the middle of the Muslim world. Marco Polo was looking for this kingdom on his journey to China. Huge lies are what produce history. The Protocols of the Elders of Zion – an anti-Semitic hoax that claimed to expose a Jewish world domination plot – is unfortunately one of the most familiar examples. For better or worse, lies have had a great influence on history.

Today there are better channels of communication, so we see a larger and more immediate proliferation of falsehoods. Before, fabricators had to find a certain kind of editor. Today, any crazy anti-Muslim fibber or any anti-Semitic imbecile can publish their conspiracy on the web. Conspiracy theories permit us to shed responsibility. The sociologist Georg Simmel said that the strength of a big secret comes from its emptiness – the best conspiracies are the ones that no one can disprove

Today there are better channels of communication, so we see a larger and more immediate proliferation of falsehoods. Before, fabricators had to find a certain kind of editor. Today, any crazy anti-Muslim fibber or any anti-Semitic imbecile can publish their conspiracy on the web. The philosopher Karl Popper wrote that the conspiracy syndrome was a constant across civilizations: the war of Troy begins with a conspiracy by the gods (according to Homer). Conspiracy theories permit us to shed responsibility. The sociologist Georg Simmel said that the strength of a big secret comes from its emptiness – the best conspiracies are the ones that no one can disprove.

Does the journalist have a part to play in shutting down conspiracies?

Journalists have to contribute to foiling the reign of lies and manipulation. This must be one of their battles, along with keeping the critical spirit alive, and staying away from the standardization of thought.