Who is trying to understand current issues, trends, and challenges, which to a great extent, will affect the future, and how are they trying to do so? BRICS Business Magazine speaks about this to Andrei Bystritsky, Chairman of the Development and Support Fund of Valdai International Discussion Club.

The world is faced with overproduction of discussion platforms – from Davos and St. Petersburg forums, large and small summits and conferences to private clubs, such as the Bilderberg. How does the format of Valdai Discussion Club stand out among them?

You know, I do not agree with your statement. In fact, the world is not faced with platform overproduction. Perhaps there is a question as to what should be discussed on what grounds, but I do not think one can speak of overproduction. As to Valdai Club, it is quite unique. It is the only international platform of Russian origin in which key issues of modern world politics and other global issues are discussed. Davos Forum remains primarily targeted at economists and entrepreneurs. It is, of course, attended by different people, including prominent politicians, but primarily problems of economic development are discussed. Same with St. Petersburg International Economic Forum, It is also an economic platform, holding discussions of businessmen. Our forum, on the other hand, is one where experts from around the world, united under the auspices of Valdai, discuss political issues and questions of global development. In this respect, the specificity of the Valdai Club is the link of Russian focus and the international community. We probably could formally compare ourselves to Chatham House or the CSIS – organizations that are devoted to relevant issues of international development – security, global political trends, state challenges, war.

The club regularly suggests and conveys numerous ideas and suggestions to the president and the government. How efficient is this process – how many of the proposed projects are up and running since the establishment of the club?

I think that the efficiency is high enough, but I do not fully understand how to formally evaluate it yet. Organizations such as the Valdai Club and similar types of discussion clubs do not produce concrete solutions. Let me explain with an example: Our central annual event, the Valdai conference, will be held in October. Among others, there will be a session dedicated to technology. We hope to see Mikhail Kovalchuk (director of the Kurchatov Institute), Alexei Kudrin, and people like Raul Delgado Wise (president of the International Network on Migration and Development, head of the UNESCO Department), among the speakers. Thus, we hope to see people, who are influential enough and have valuable opinions. We shall not say that it is necessary to focus on so-and-so technologies, but try to offer some kind of framework of thinking in these coordinates, in which one can build a realistic behavior model, make predictions, and develop specific areas of action. To do this, we need top-notch scientists, which I hope will abundantly attend the conference.

The ideas we discuss and bring forward can be built into an already existing system of ideas, and collide with other proposals emanating from various agencies and intellectual organizations. In my opinion, we are working quite effectively, since we hear the echoes of our considerations. We often respond to questions, which it seems to us, the country and the world are faced with.

I believe that the Valdai Club has made a substantial contribution to the discussion of how Central Eurasia can be defined. As we can see, the debates about the pairing associated with the relationship between Russia and China, the development of the Silk Road Economic Belt, are not in vain. I can see how these ideas live on, how some large enterprise groups perceive them, how the government is working on the areas that we have discussed. If we speak of practical contributions, this is a good example.

Another exemplary case is the Middle East, at least due to the fact that many experts, including Russian ones, that are discussing the region, are actually involved in the resolution of those issues. For example, Vitaly Naumkin works directly with the UN special envoy on Syria De Mistura. Naumkin is a Valdai expert and scientist who is not just offering ideas, but bringing them to life with his own hands – at least those which are possible. I can say that much of what was discussed about the Middle East at the club’s recent meetings has been written in the papers associated with this region, can now be heard directly in political discourse, thus our activities seem useful to me.

What themes does the club plan to discuss in the near future?

We discuss several major topics; for example, at the Valdai conference in October, we are going to discuss the topic of what it is today that determines tomorrow. We want to understand what current problems, trends, and challenges will affect the future to the greatest extent. It is clear that there is technology, there is the role of states, there is an understanding of the role of military force, which, as we see is being actively used in the world – all of these matter affect the construction of the future, which is what we are discussing. It will be attended by serious people, who can afford to speak freely on such topics. They include, for example, Thabo Mbeki, the former South African President, and hopefully, the former head of Austria, Heinz Fischer, Cristina Kirchner of Argentina, and Tarja Halonen, previously president of Finland. These are people who made decisions related to key global challenges, who hold a lot of knowledge (and, I suspect, know so much that they are not at liberty to share all of it), and will have something interesting to say.

And we are still going to discuss and hold conferences related to the Middle East, because the region is sensitive, dangerous, and finds itself at a difficult crossroads. The Far East is also a curious topic. Obviously, this is one of the fastest growing regions of the Asia-Pacific region. The prospects of its development, plus Russia’s role and place in this process are very important considerations. We are seriously thinking about how US-Russian relations will develop; this is another fundamental issue, but now, perhaps, we can only keep guessing due to a presidential election whose outcome is difficult to predict. But whatever the administration in the United States, the country’s and the world’s problems will not disappear, and global issues must be solved. We can see how difficult everything is turning out to be in Syria, but does it mean that we have to stop doing anything at all? No, such an approach is incorrect. 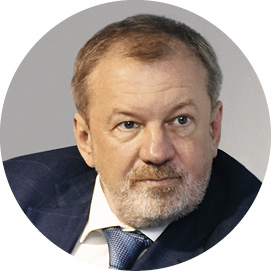 Chairman of the Development and Support Fund of Valdai