The Market of Extremes

Leonid Boguslavsky, chairman of ru-Net’s Board of Directors and one of the richest businessmen in Russia, actively invests in Indian Internet companies. The global investor talks to BRICS Business Magazine about the peculiarities of the market and the difference in mentalities.

Market invests in scale. And it is interestingly arranged: It gets easily excited, an investment boom starts, and then recession takes place just as quickly, which is disappointing. Such ‘up-and-down’ waves have occurred two or three times in the past six years. During the ‘period of excitement’, funds and investors are ready to sign agreements of intent within literally a week of the first meeting with the company. You can hardly find anybody to spend significant time researching the companies with due diligence. Investments of $30 million to $50 million may be closed within a month. While, the deal’s corporate documents and conditions are very tough, at the same time, these factors are offset by the unreliability of their implementation.

At the stage when a market boom subsides, there comes another extreme: Deals can take eight months, and no one is in a hurry.

On the mentor role

In India, Internet companies are, so to speak, younger. Therefore, we can tell our Indian partners which mistakes to watch out for, what has worked in the past, and what did not work in other markets. In particular, we explain to them that in many business models, one should not forget about the web and should not completely switch to mobile applications, even while keeping in mind that 80% of people use smartphones. We can advise them on how to work with referral models, such as ‘Bring a friend and get a discount or a coupon’. We know what kind of frauds and traps exist here. This experience allows us to communicate with founders of Indian companies, who recognize us as ‘smart money’ and realize that we understand business. Despite Indian peculiarities, all the companies, in principle, fell into the same traps.

On a bright future

Indians are good sellers by nature. This is why everybody, both founders and partners in each particular company, are constantly selling the story of a bright future. They delay bringing bad news until the last moment. One can arrive at a board of directors meeting and find out that the company has run out of money and is unable to pay salaries starting tomorrow – even though you spoke with the founder on the phone before that, and he assured you that everything was fine.

Such is their mentality: They do not like to talk about the bad, and therefore, will tell you that all is well until the very last moment. You will not understand the present situation until you meet in person. It doesn’t work, even if you are a shareholder and you arrange a distance-conference call to find out the situation. Only if you arrive and look the person in the eye is there a chance to determine what is happening. This is why we work in India several days a month.

The market here is open: Information leaks easily, sometimes too much so, and it becomes available to all players. For example, news of our deals has often appeared already at the stage of signing a preliminary agreement.

The current losses of Indian companies have greatly decreased in comparison to what they were in 2012 to 2014. The hype fell in 2015: Everyone started to reduce costs, including the ones on marketing. And yet, 90% of fast-growing businesses did not break even. In general, in five years, we have observed just a couple of break-even companies on the Internet market, and those were small and grew moderately.

Nevertheless, everyone is trying to ‘raise’ capital in advance and to have a stock of money sufficient for a period of at least seven to 10 months. However, the positive side is that investment growth leads to a very large scale, in contrast to Russia, for example, where companies hit a growth ceiling, as they are limited by the market niche in which they work.

On the readiness to change

Another nice Indian feature is that they are quick to react to changes. If they see that the business model has a problem, they are ready to change it immediately. In Russia, this is rarely done; the majority of people will hang back until the very end and say, “No, everything will change soon.” For example, a company in which we invested at an early stage in India, Snapdeal, started with the Groupon model – group discounts. But when they saw that this model had certain limitations, they quickly changed the business model to marketplace stores of goods and services. Today, a wide variety of shops are represented there, from clothes to gadgets. Snapdeal was worth about $170 million in 2012, and the company’s value was estimated at $6.5 billion by the beginning of 2016.

Indians delay bringing bad news until the last moment. You can arrive at a board of directors meeting and find out that the company has run out of money and is unable to pay salaries starting tomorrow – even though you spoke with the founder on the phone before that, and he told you that everything was fine. 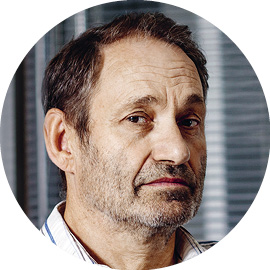 Chairman of ru-Net’s Board of Directors; one the richest businessmen in Russia