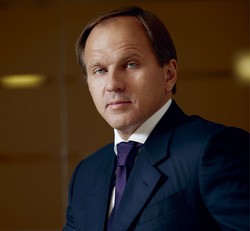 Lev Kuznetsov, Governor of Russia’s Krasnoyarsk region, is accustomed to hearing the never-changing litany of myths about Siberia from foreigners. Here he tells us that these myths can and should be dispelled, because both sides suffer from the resulting miscommunication.

At an OECD conference recently held in Krasnoyarsk, the former prime minister of Belgium, Yves Leterme, told the audience that the old people in his country used to try and scare their youngsters into studying hard by telling them they would otherwise end up in Siberia. They were convinced that those who did not make progress or good grades were doomed to end their days in that wild country.

We tend to encounter other examples of this sort of ‘phantom thinking’ relatively frequently; most non-Russians have a very vague idea as to what Siberia is all about, while the civilised part of Russia is limited in their mind to the Garden Ring of Moscow. While general perceptions of Brazil, India and China may well be more or less close to reality, when it comes to the eastern part of Russia, most people tend to think of sub-zero temperatures and long roads.

However, in reality, things do look different. The Krasnoyarsk region has been consistently one of the top ten Russian regions in terms of level of investments. For example, today, the Vankorskoe oil and gas field produces almost 20 million tonnes of oil per year. Since the launch of this project, Rosneft has invested nearly $6 billion, with the estimated aggregate returns expected to reach $80 billion.

Naturally, the black gold is just another typical cliché associated with Siberia – much like the cold weather. Therefore, it would behove us to add that the region boasts a well-developed non-ferrous metallurgy industry, space industry, education system, and hydropower plants. Krasnoyarsk is also home to the Siberian Federal University – one of the largest in the country. Over 90% of Russia’s satellites used for civilian purposes, and a broad range of space vehicles commissioned by foreign partners, are produced right here in the Krasnoyarsk region – all based on local competencies that are generated, implemented and supported by us.

The old people in Belgium used to try and scare their youngsters into studying hard by telling them they would otherwise end up in Siberia. We tend to encounter other examples of this sort of ‘phantom thinking’ relatively frequently; most non-Russians have a very vague idea as to what Siberia is all about, while the civilised part of Russia is limited in their mind to the Garden Ring of Moscow

Both Russian transnational giants and large European companies feel perfectly at home in Siberia. The share of foreign investments is not that great, but this trend is clearly about to be reversed. Today Lufthansa Cargo – the German airline’s cargo-carrying division – uses our airport for refuelling, which enables them to save on fuel costs. With the passing of Open Skies laws the company plans to increase the number of flights.

Sometimes people ask me if I am ready to lobby the interests of foreign investors. The story of our relations with Lufthansa Cargo helps to answer this question. This February, at the Krasnoyarsk Economic Forum, we signed an agreement to develop the airport with the Ministry of Transport, the Customs Service and Rosaviation, in the presence of the prime minister. If that is not lobbying in the best sense of the word, I do not know what is.

It is rather obvious why we cannot come up with a hundred examples of this kind. The greatest obstacle is that we have a less intensive consumer market compared to European Russia. Once I asked a representative of a large international automotive company to share with me the criteria based on which his company selected the location to build their plant, and whether they considered regions located beyond the Urals at all. He honestly replied that they did not. Their shareholders believed that sound demand was the most critical requirement. Incidentally, the Krasnoyarsk region has consistently ranked high among other Russian regions in terms of per capita income levels, yet one could not say that the region is densely populated. Markets like ours would only pop up on radars after the most populated areas have been fully explored.

However, our advantage lies in the fact that we have a clear understanding of our needs – and are ready to translate them into investment proposals. Last century the Krasnoyarsk region was considered to be too far removed from any international centres and lines of communication. Now we know that its geographic location offers unique logistical opportunities. The best air route from America to Asia lies over the North Pole. Trans-Arctic flights would require spare airfield capacities and air-traffic control facilities in northern Russian cities. Many would find it hard to believe, but a powerful flow of commodities and people will course through Siberia in the near future. One does not miss out on such an opportunity.

Another critical centre of gravity is the urban environment, with its energy component. In this area we truly need additional competencies. The regional administration is capable of creating an enabling environment that would help businesses to quickly obtain permits. We can manually fine-tune our operations, offer profit tax benefits and contribute our own funds to build a part of the infrastructure. If underinvested areas are transformed into business opportunities and concrete projects, that would be a good result.

What is more important is to overcome the ignorance and miscommunication. Now Krasnoyarsk is competing to host the 2019 Winter Universiade, which is not just another sporting project for the city and the region, but a real opportunity to convey to the youth of the world who we really are. However, this project would require significant changes in the city’s infrastructure. That is why we are interested in investments and state-of-the-art technologies in the area of transportation and municipal and public services, as well as grassroots sports. We stand ready to demonstrate that we are capable of creating an enabling environment to support investments as efficiently as the rest of the civilised world.

I believe that establishing new and reliable contacts with this world will become one of the key challenges for the whole of vast Siberia.