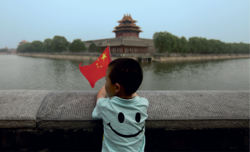 To find the key to understanding China’s economic miracle, one should filter into the Chinese family. Professors Shaomin Li and Sam Ho Park speak about Chinese moms, kids, and other aspects of the world’s most convincing success story.

The Puzzle in China’s Miracle

China has had a high economic growth rate of approximately 10% annually for about thirty years, creating an economic miracle that few will dispute. However, as to what factors caused such a miracle, there is little consensus. The dominant view is that the economic institutional change, started after Mao’s death in 1976, is the main cause of the phenomenal economic performance in China. While it is true that the economic reform, or institutional change, played an instrumental role in China’s economic growth, we must recognize that institutional quality alone cannot explain the high economic performance in China.

In fact, China’s economic institutions have some features that are not very conducive to growth: It has a huge public employee population supported by taxpayers, and these employees do not have high efficiency; state-owned enterprises account for a big share of the economy and enjoy government protection; property rights protection is weak, and restrictions on private firms are many. How could China achieve such great economic growth under such an institutional environment? In collaboration with Ernst & Young, we undertook a study to solve this puzzle.

Culture – the Missing Factor in the Equation

A factor that may help explain the economic miracle, but which has been missing in most academic research on this topic, is culture. The Chinese today can be said to have the most pro-economic growth culture for political, economic and historical reasons. Historically, the Confucian culture of frugality, hard work, and respect for the family is conducive to economic efficiency and productivity. Politically, the authoritarian political system has shaped a population that is relatively more obedient and respects authorities; traits that contribute to efficiency for low-skilled work such as manufactu­ring. Economically, decades of poverty under Mao’s rule (1949–1976) made people extremely motivated to work hard to make money. The weak rule of law and lack of a legal tradition nurtured a relation-based culture that encourages people to circumvent the laws and get things done using private relations. All these cultural traits contributed to China’s high economic growth.

That the Chinese culture is conducive to high productivity and performance has been widely discussed and debated. And interestingly, such a debate has even been extended to overseas Chinese culture. In 2011, Amy Chua wrote a highly controversial book on this topic entitled Battle Hymns of the Tiger Mother (New York: Penguin Press, 2011), in which she reveals the secrets of a Chinese mother who has successfully molded high-performance children.

“A lot of people wonder how Chinese parents raise such stereotypically successful kids…and whether they could do it too”, Chua begins her book, “I can tell them, because I have done it.” And then she lists the things her daughters “were never allowed to do.”

“Attend a sleepover; Have a playdate; Be in a school play; Complain about not being in a school play; Watch TV or play computer games; Choose their own extracurricular activities; Get any grade less than an A; Not be the #1 student in every subject except gym and drama…”

Throughout the book, the Tiger Mother shows how single-mindedly determined she was to enforce these rules at any cost, to drive her two daughters to excellence. Chua herself is a product of such highly-demanding parenting: she went to Harvard as a student and is a law professor at Yale. Her two daughters are A-students in high school and one of them was accepted by Harvard and Yale after her book was published.

For parents who want to do it, here are two of her insights: parents know what is best for the children, so be authoritarian; and plan long term – the children may hate you today, but they will be better off in the future, and appreciate you.

This, according to Chua, is precisely where the Western parents have failed.

“Western parents try to respect their children’s individuality, encouraging them to pursue their true passions, supporting their choices, and providing positive reinforcement and a nurturing environment. By contrast, the Chinese believe that the best way to protect their children is by preparing them for the future, letting them see what they’re capable of, and arming them with skills, work habits, and inner confidence that no one can ever take away.”

A Systematic Study on Culture and Productivity

Interestingly, what Chua summarized as the secrets of Chinese mothers’ success in childrearing are similar to the culture traits we find in our systematic study of culture and production using a database of more than 40 emerging countries.

We identified three groups of cultural factors that significantly affect labor productivity in emerging countries (i.e. countries with a per capita income below $10,000). The first group are economic-related factors, including people’s perception about their own financial situation, and their attitudes toward income inequality and taxes. We found that people who are not satisfied with their financial situation tend to plan for the longer term and are willing to take greater risks, and this attitude in turn helps improve productivity. We also found countries with high productivity gains have a social attitude that tolerates inequality more, and dislikes taxes.

The second group are attitudes toward authority and freedom. We found that the following three cultural factors are conducive to labor productivity gains: a culture that accepts and expects great power distance (i.e. less powerful people are willing to accept the fact that power is not distributed equally); people who perceive that they don’t have much freedom tend to be more productive; and a social attitude that prefers government-assured social safety and stability to deregulated society in which people are responsible for their own actions. In sum, the culture of the high-productivity-gain countries tends to be more authoritarian and less free.

The third group of factors is all about family value. The family – the most basic element in a society and the primary organization in which a person is brought up and is socialized – plays the most important role in forming the culture of a person. It is the most important vehicle through which culture is passed through generation to generation. When the family is broken, it will adversely affect the children’s learning of the established culture of a society. We examined three family-value-related attitudes. High productivity-gain countries tend to frown on non-traditional family arrangements, and hold a view that “a child needs a home with both a father and a mother to grow up happily” (World Value Survey). These cultures also disapprove of single motherhood as a conscious lifestyle choice. Statistically high-productivity countries have lower divorce/separation rates. In general, the higher productivity-growth countries tend to have stronger traditional family values and more intact families.

Especially for the least developed nations, implementing policies that can help establish an obedient and disciplined labor force may help increase productivity growth

What can we learn from this study in terms of government policies?

Government policies often have either intended or unintended effects on culture, which in turn affect productivity gain. Here are some things a government can do (or avoid doing) to encourage a more productivity-enhancing culture.

First, we found that the following economic-related attitudes are associated with higher productivity growth: unsatisfactory feelings toward one’s financial situation; an attitude against taxes; a belief that difference in income is an incentive for people to work hard; and the willingness to take risks. Several policy implications can be drawn from these. For example, high taxes and high social welfare that aim to reduce income inequality do not help nurture a productivity-growth culture. Governments should institute economic policies that encourage risk-taking and entrepreneurial behavior, such as making it easier to start a business (simplifying the process and instituting automatic approval of business registration). An extension of the above discussion is that governments should not raise the wage level of regions with low labor productivity, because doing so does not address the source of the low productivity; on the contrary, it may exacerbate the problem by nurturing an entitlement culture that hinders productivity growth.

Second, our finding regarding the attitude toward authority and freedom and its relationship with productivity gain shows that there is a positive association between a more authoritarian cultural environment and productivity gains in the emerging countries (with an income level less than $10,000).

For the low-income, less developed emerging countries, the state should strength their capacity to formulate and implement policies that can nurture a productivity-gain-friendly culture. The educational policy should allow the school to have more authority over students’ learning and discipline. Especially for the least developed nations, implementing policies that can help establish an obedient and disciplined labor force may help increase productivity growth. These policies work best if combined with economic reform that aims at instituting the free market and the rule of law.

Third, we found that family is important in nurturing a productivity-growth culture. There is a strong association between high productivity gains and low divorce rate, a strong disapproval of single mother as a lifestyle choice, and a view that a happy family must have both father and mother present.

Western parents try to respect their children’s individuality. By contrast, the Chinese believe that the best way to protect their children is by preparing them for the future, letting them see what they’re capable of, and arming them with skills and inner confidence that no one can ever take away

While we do not intend to engage in the moral debate about traditional family values versus alternative lifestyles, our study indicates that government policies in the less developed, emerging countries, that either directly or indirectly encourage traditional family values, will be conducive to productivity growth. Governments should not institute policies that directly or indirectly encourage teenage childbirth (which tends to end up with the child living with a single mother), births out of wedlock, or facilitate or even encourage the disintegration of the family.

A Need for a Cultural Revolution

Today the world is still slowly climbing out of one of the biggest recessions in contemporary history and all countries are seeking policy tools to revitalize their economies. Our study may help this effort by looking into the role of culture in economic growth, and finding that there are certain cultural factors that are more conducive to productivity growth. The implication of our study is that social institutions, including governments, firms, schools, and families, can actively help nurture such productivity-growth-friendly cultures. It is our belief that this effort is much needed and will have an impact on the global recovery, especially on the emerging countries which have garnered so much hope from the world to be the engine of growth in the coming decades.