Technological Hunger and an Abundance of Resources 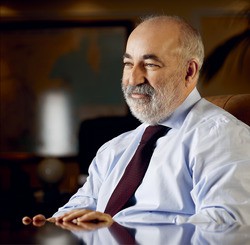 Developing countries often tend to outpace the developed world in terms of penetration of new technologies. Viktor Vekselberg, President of the Skolkovo Fund and Chairman of the Renova Group Board of Directors, knows it better than anyone else. Yet, according to him, it is technologies that remain the greatest and most sought-after resource for the BRICS countries.

Your companies operate in different countries. Is it possible to lead a global business and play by the same set of rules everywhere, or would the local culture and informal customs inevitably affect the way you do business?

The Renova Group of companies owns assets in Russia, Europe, Africa and North America, in industries that show high growth potential. Even during the crisis virtually all the businesses demonstrated positive economic dynamics. So, one can be successful in leading a global business – but can one play football using the rules of tennis? The rules are predicated not on the wish-list of companies but on specific markets, and in that respect they may differ depending on the industry – even within a single country. I believe in this case it would make more sense to talk about the principles and values shared by specific companies and people rather than rules, for these principles and values can remain constant in different countries and sectors. For instance, regardless of the continent it operates on, the Renova Group strives to maintain world-class corporate governance standards and use state-of-the-art technologies in production and management, as well as to strike partnerships and alliances to maximize the effect of joint investments.

What was your experience in South Africa in this regard?

Our experience in South Africa has been exceedingly positive. In 2005, United Manganese of Kalahari, a company developing a manganese field, became the Renova Group’s first business in South Africa. Over a relatively short period of time, together with our partners, we managed to create a company that has become one of the world leaders in the manganese market today. Apart from producing manganese ore, the Renova Group also has a stake in a manganese processing business; Transalloys, a ferroalloy smelter, is a prominent driver of economic growth in the region.

Developing markets (including Russia) are often accused of lacking the requisite business culture. How fair is this statement today?

I would not go as far as to say that Russia, for instance, has a specific business culture that is different from the rest of the world. I do agree that in Renova’s Swiss partners, high-tech companies such as Sulzer and Oerlikon, we found fine examples of well-organized and structured processes. We try to learn from them and replicate their experience. Undoubtedly, we can find negative examples in Russia and elsewhere, however the leading Russian companies have long been able to compete on foreign markets and were quick to find common ground and reach an understanding with their partners. I do not like it that many people are still affected by old stereotypes, believing that no deal can be made unless you and your partner drink a case of vodka together.

In your opinion, in which country would a well-structured relationship with the government (and perhaps a personal relationship with specific personalities in the government) be particularly important for a large business? Or do you think this question is misplaced, and that after reaching a certain level, investors or entrepreneurs can no longer count on such a relationship to protect their investments?

Your question already contains part of the answer. In my opinion, a large business and the government have no choice but to interact. However, it is not so much about protecting one’s investments or obtaining tax benefits. The crux of the matter is that a large-scale business presupposes significant influence in a number of critical social aspects. The larger the business, the greater the influence on economic development – and thus the greater the level of social responsibility in the region. We came to South Africa, set up a joint venture with a South African company, and performed exploration, and in so doing created additional jobs, providing an impetus for the development of small and medium-sized businesses in the region. To demonstrate that our interests were long-term, Renova joined efforts with its partners to open the Technical Training Center for local residents.

The logic behind global economic development suggests that there will always be undervalued countries... Given the fact that there are many highly qualified professional investors among the readers of your magazine, I think if we name several specific small countries these could right away be classified as ‘overvalued’

Which developing market (other than Russia) do you find most interesting as an investor today? Are there any countries that are clearly undervalued and deserve greater attention?

The logic behind global economic development suggests that there will always be countries of this sort. The real question is how you go about assessing risks and investment horizons. Given the fact that there are many highly qualified professional investors among the readers of your magazine, I think if we name several specific small countries these could right away be classified as ‘overvalued’. But on a serious note, instead of referring to specific countries, I would rather talk about the implementation of high-tech products in developing markets in general. For example, in recent years, the Renova Group has been working hard to transfer foreign state-of-the-art technologies to Russia, including cutting-edge coatings, alternative energy, biodegradable polymers, and the latest medical equipment. Investments funneled towards these projects total billions of dollars.

Many believe the BRICS idea to be out of date. Oftentimes other countries in other configurations are declared leaders of the new world. What do you think about all these blocs (MIST, CIVETS, Next 11) and the BRICS countries in particular?

I think that overall this daisy chain of acronyms goes to show that the significance of the so-called ‘new economies’ is growing in the world. In other words, the very fact that these new blocs keep emerging, and that they are relatively broadly represented in the G20 format, demonstrates that these economies are tending to get stronger – and the Russian economy in particular.

Jim O’Neill believes that 25-50 years would be enough for Russia to earn the status of a developed economy. Moscow often perceives this prediction as excessively conservative. Do you think that O’Neill’s assessment is on the mark?

Ultimately, everything will depend on ourselves, even though in my view such nomenclature as ‘developed’ or ‘developing’ is somewhat obsolete. In this rapidly changing world many of the so-called ‘developing’ economies are strongly outperforming the ‘developed’ ones, for instance when it comes to the level of penetration of advanced technologies.

One can be successful in leading a global business – but can one play football using the rules of tennis? The rules are predicated not on the wish-list of companies but on specific markets, and in that respect they may differ depending on the industry – even within a single country

When you discuss Russia with your colleagues from other countries, do you tend to correct their errors of judgment? How would a standard set of misconceptions about Russia vary from Asia to America?

As we already agreed there are many myths that surround any country, and Russia is one of the record holders in this respect. I often had to dispel myths of this sort, but the best recipe is for people to come and visit Moscow or St. Petersburg and see the reality on the ground for themselves. From this perspective the St. Petersburg International Economic Forum has become a powerful tool that helps to bust negative myths about Russia, and I hope that your magazine will also put in an effort towards that end.

All of the investment areas that would pique the interest of large businesses are well known. Due to the fact that the BRICS countries are predominantly classified into resource-based economies (Russia and South Africa, with Brazil somewhat apart), and global consumers of resources (China and India), investments in joint production, refining, and transportation of resources are constantly on the rise. In this regard Africa plays a key part in supplying natural resources for the world economy, and has huge growth potential. For example, the largest gas field in the world was discovered in Mozambique, and some significant oil fields are being discovered as we speak. The interests of large businesses are centered on this region, and Renova’s plans for the future are also linked with Africa. Russia alone has invested $5-6 billion in production, and continues to raise the game.

Undoubtedly, we can find negative examples in Russia and elsewhere, however the leading Russian companies have long been able to compete on foreign markets... I do not like it that many people are still affected by old stereotypes, believing that no deal can be made unless you and your partner drink a case of vodka together

Does BRICS as a political project affect your business?

I would not go as far as to qualify BRICS as a political project. It is more of a center, developing solutions alternative to what the G8 can offer for the twenty most industrialized nations. It is just that only recently the attempts to develop a common approach to politics have become more pronounced.

The BRICS economies are big; these countries have strong development potential and enormous accumulated reserves. However, apart from investments, natural resources, and workforce, the development process also requires technologies. India, Russia and South Africa urgently need modern technologies; therefore, the best thing they can do is implement them fast.

What role is assigned to the BRICS Business Council? What is the rationale behind this body?

Back in 2011 Russia came up with the initiative to create the BRICS Business Council, which would include representatives of each country. During the upcoming fifth summit in Durban, the countries will discuss the mechanics of how to set it up. The Business Council’s core mission will be to strengthen trade and economic ties between the member states and, in particular, increase the turnover of goods, assist companies in negotiating contracts, and improve the investment climate.

In your view, how promising is the idea of creating a BRICS Development Bank?

Indeed, creating a development bank for the group will become the main theme at the summit. This idea does hold a lot of promise, since such a bank could offset the negative trends in the world economy and dilute the West’s financial clout. It is too early to talk about this bank becoming fully operational – a feasibility study for this project is currently underway.

What do you think the agenda for the sixth (Russian) BRICS Summit could be?

The BRICS countries are gradually transcending the economic realm and becoming a center for developing solutions to acute problems. Cybercrime, climate change, security issues and the war on terror, combatting drug trafficking, ‘volatile’ regions – unfortunately, all of these challenges will remain topical a year from now.

Founder and Chairman of the Renova Group Board of Directors