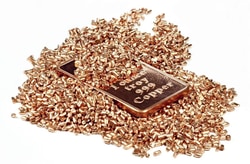 The future of innovative and environmentally friendly technologies depends to a great extent on copper – one of the first metals to be harnessed by human beings. However, the richest reserves have already been depleted, and in order to meet growing demand, people have had to learn to extract copper from the so-called poor ore. The technical solutions that enable its enrichment in many ways determine the future of non-ferrous metallurgy in Russia.

Thanks to its high conductivity, copper has virtually become the new gold: It is impossible to replace in electrical equipment, the automotive sector, renewable energy production systems, and construction. Circuits used in mobile telephones, computers, and other devices, heating equipment, solar panels, pipes used to transport liquids and gases – these are just a few example of where this metal has proven indispensable in state-of-the-art applications.

Copper is needed to manufacture car engines, radiators, brakes, and other components. In an average urban-class vehicle, the length of all copper wires can reach nearly 1.5 km, while all of the copper parts combined may weigh at least 20 kg. In a hybrid vehicle, all copper wires may weigh in excess of 40 kg, while the car of the future – Tesla – needs over 65 kg of copper. The phenomenal rise in demand for electric cars (preliminary orders for third-generation Tesla exceeded $10 billion within just 10 days of its presentation) shows that copper will become an increasingly sought-after resource.

The environmentally friendly drive and development of innovative projects determine the demand for this metal: Even the development of renewable energy sources (solar and wind power) would be impossible without it. Not only is copper used in solar panels but also in power line cables that deliver electricity to consumers.

In a number of countries, copper pipes have become the main solution used for the above purposes. In France, the United Kingdom, and Australia gas is supplied to buildings exclusively through copper pipes, while in the UK, USA, Sweden, and Hong Kong, they are used in water supply systems, and in the UK and Sweden, in heating systems.

Copper consumption can only be reduced in the case of a major global economic crisis.

Copper reserves are spread evenly across different parts of the world; however, truly rich reserves are few and far between. Mankind has been mining copper ore for thousands of years and now they have to dig deeper and deeper to get to the red metal, while the content of copper in the ore keeps dropping. In the 17th century, we used to produce the so-called ‘light’ copper, which was extracted from ores with six percent to nine percent copper content, however, today, even five percent ore is already considered rich.

Russia’s copper reserves, which the Ministry of Natural Resources estimates approximately at 60 million tons, are predominantly found in nickel and copper ores extracted in the Kola Peninsula and the Taimyr autonomous region. According to specialists, there is about enough to go around for 50 years at the most. Western mining and metallurgy companies extract copper predominantly from porphyry copper ore. Russia also has its fair share of porphyry copper reserves in the Urals. In the Chelyabinsk oblast alone, probable reserves reach more than two billion tons of porphyry copper ore. However, the contents of copper in this ore are rather insignificant.

Today, the metal is produced almost entirely from ores containing no more than one percent copper. As a rule, a deposit is economically feasible to develop if the copper content ranges from 0.5% to one percent. Some 40-50 years ago, such deposits were considered economically unviable: The balance between the technologies and economics was reached at 2.5% to three percent concentration of copper in the ore. The first company in modern-day Russia to begin to develop sub-par porphyry copper ore was Mikheevskiy GOK (mining and processing combine) ZAO. The ‘poor’ ores from the Mikheevskiy deposit will in many ways determine the future of non-ferrous metallurgy in Russia. According to specialists, the reserves found in this deposit – one of the largest in Russia (ranked among the top 50 in the world) – is estimated at 1.8 million tons of copper in the ore. Apart from copper (0.42% content), the ore found at the Mikheevskiy deposit contains silver, molybdenum, rhenium, and gold.

Mikheevskiy GOK was built by the Russian copper company in late 2013. The company’s specialists were facing a daunting task: They had to develop and implement an ore enrichment technology that could make the whole project economically viable. This required both Soviet and international experience. As a result, they chose a flotation method employing chemical agents that enabled them to increase the content of copper in the ore from less than one percent to 22% in copper concentrate. The approach they used with respect to this deposit involved ore coarse crushing directly in the pit as opposed to doing it at the surface. Afterwards, the crushed ore is delivered to the plant on a conveyor belt, which eliminates the need for expensive transportation by lorries. The choice of optimal technological solutions and hardware enabled the Russian copper company to build one of the most profitable enterprises in the mining and enrichment industry in the post-Soviet space. Mikheevskiy GOK’s design capacity is 18 million tons of ore or 63,000 thousand tons of pure copper per year. The construction bill that the Russian copper company had to foot was estimated at 28 billion rubles.

Thanks to its high conductivity, copper has virtually become the new gold: It is impossible to replace in electrical equipment, the automotive sector, renewable energy production systems, and construction. Circuits used in mobile telephones, computers, and other devices, heating equipment, solar panels, pipes used to transport liquids and gases – these are just a few example of where this metal has proven indispensable in state-of-the-art applications

After making sure that Mikheevskiy GOK was a success, the Russian copper company decided to replicate the positive experience and it is now planning to build the Tominsk GOK capable of processing 28 million tons of ore per year. The combine will employ 1,200 people. The construction of the first mining and processing combine line in the Chelyabinsk oblast is slated to start in 2017; preliminary estimates show that the project will take around three years to implement. Once launched, Tominsk GOK will become one of the largest greenfield projects in the post-Soviet space. It has been included in Russia’s ‘non-ferrous metallurgy development strategy for 2014-2020’; however, the greatest economic benefits will be reaped by the Urals region and the Chelyabinsk oblast in particular. The Tominsk combine will make it possible to expand Russia’s non-ferrous metallurgy and its raw materials base for another 40 to 50 years. In other words, it will enable Russian manufacturers of non-ferrous products to make their own contribution to the development of future technologies. Experts predict that despite the temporary slowdown in the global non-ferrous metals market, the demand for copper will only grow; it is expected that the breakthrough driving demand growth will happen already next year. The giants of the Russian non-ferrous metals market are certainly ready for this challenge.