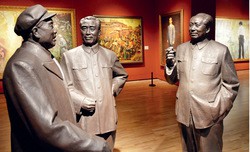 Claire Hsu talks about what the museum boom in China is likely to bring and what it can tell us about Chinese society.

China’s museum boom has generated a lot of attention recently, as growing government and private investment has pushed the total number of museums to about 3,800 – and rising. To get a sense of the speed and magnitude of this trend, the figure has almost tripled from the 1,373 museums open in 2000, and the majority of those were built in the years since Deng Xiaoping’s economic reforms in the late 1970s. In 1949, for example, when the communists took control, there were only 45 museums in China, many of which were destroyed or closed during the Cultural Revolution.

Art museums are in the minority in a scene which encompasses the most specific and mundane of collections, including the Beijing Museum of Tap Water. However, the most prominent buildings are dedicated to the arts. The decision to expand the National Art Museum of China to six times its current size in a new building in the Olympic Park at an estimated cost of $145 million, led by the French architect Jean Nouvel and the Beijing Institute of Architectural Design, is a case in point.

Investment in China’s museums doesn’t come from the government alone. The private sector increasingly funds high-profile collections, from the well-established Rockbund Art Museum in Shanghai and the Ullens Center for Contemporary Art in Beijing, to the new, lavish Sifang Art Museum in Nanjing and the Yuz Foundation showcasing contemporary art in Shanghai. There are many reasons for this boom, including a growing interest in investing in art among China’s new class of super-wealthy, priority access to state-owned land, and a growing philanthropic will to share one’s collection with the public.

It is evident that the government has identified art and culture as a pillar to buttress China’s national identity and position as a world superpower. This is demonstrated not only in the extensive state-sanctioned building of museums, but also in its involvement in expanding the market for art in China. China’s largest auction house, Poly Auction, is also the third-largest auction house in the world, and part of the $40 billion state-owned Poly Group, which covers a wide range of investments.

The majority of the art museums being built, while donning the latest architectural coats, are severely lacking in content, programming or qualified professionals, which often come as an afterthought. Many of the state-run museums have declined to show or collect experimental art, or anything that may be deemed controversial. And most museums double up as rental spaces which in effect means that anyone who can afford to rent the space can have a ‘museum’ show

While China is witnessing what might be described as a true cultural revolution – in stark contrast to the 1966-1976 period of the same name, which saw the destruction of books, museums and cultural objects on a national scale – there are a number of critics who view China’s current trajectory as being too focused on the buildings, with little regard for content, too market orientated, and stifled by political constraints. The majority of the art museums being built, while donning the latest architectural coats, are severely lacking in content, programming or qualified professionals, which often come as an afterthought. Many of the state-run museums have declined to show or collect experimental art, or anything that may be deemed controversial. And most museums double up as rental spaces which in effect means that anyone who can afford to rent the space can have a ‘museum’ show.

On the other side of the argument, with museums in the West struggling to survive and stay relevant in the 21st century, might these kinds of spaces, which blur private and public descriptions and allow for commercial funding, offer a more sustainable model for the future? And might we speculate that the future of the public exhibition is one that will operate in less permanent and more fluid structures?

While there are varying schools of thought on the current museum boom in China, most importantly we must ask whether these state-run spaces can truly become platforms on which ideas and art practice can be tested and pushed. At the same time, how will these spaces invite and develop critical thinking and inquiry? It is only in these environments that art can truly flourish and evolve our current thinking of the world. And it is art that pushes the boundaries that will ultimately become historically significant. While critically engaged art is being made by Chinese artists in China, what does it mean if they cannot show their work in the hundreds of art museums being built in the country?

At the non-profit organisation Asia Art Archive, which I co-founded in 2000 in Hong Kong, for example, we felt it essential to start with the ‘software’ first (an extensive public archive on the recent history of art from Asia, which is constantly activated through public programmes) then shift the physical walls of the institution around the content, and gradually. And while China is one of the highlights of our collection, our intent is to establish a comparative approach between the different art histories of the region and draw alternative frames of reference from those well-travelled between Europe and the US.

As China embarks on the largest investment in the arts in the region, will it take the lead in opening up an exchange of ideas through the arts between neighbouring countries such as India and Indonesia, so it is not merely an inward-looking, national process? And in what way will the Chinese art world impact on those in other parts of the globe?

It is very likely that most of the museums being built will have a short shelf life, but those that survive, that continue to receive backing and become relevant to society, will play an important role in presenting narratives and histories through art to the public. The future of China’s art scene will continue to be inextricably bound up with changes to its society and its role in the world. We must hope that art fundamentally becomes more than a trophy; a valued space for ideas and knowledge that will enrich one of the most rapidly changing societies in the world.