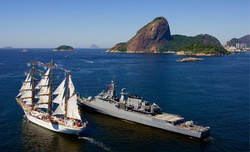 Usually it is heads of state and foreign ministers who talk about soft power, not chiefs of defense. Brazil is an exception. The country’s Minister of Defense can freely converse on world affairs – while also managing to build nuclear-powered submarines.

It is, perhaps, a truism for Brazil’s citizens that their country is and always will be a peaceful one. After all, Brazil has lived with its ten neighbors without conflict for almost 150 years, having settled its borders through negotiation. It last went to war in 1942, after direct aggression by Nazi U-boats in the South Atlantic. It has forsworn nuclear weapons, having signed a comprehensive nuclear-safeguards agreement with Argentina and the International Atomic Energy Agency. Through the Common Market of the South (Mercosur) and the Union of South American Nations (Unasur), Brazil is helping to integrate the region politically, economically, socially, and culturally.

But is soft power enough for one of the world’s major emerging countries?

To be sure, Brazil’s peaceful foreign policy has served it well. Brazil has used its stature to advance peace and co-operation in South America and beyond. Its constructive stance derives from a worldview that accords pride of place to the values of democracy, social justice, economic development, and environmental protection.

Brazil’s unique approach to promoting these ideals is an important source of its soft power, reflected in the broad international support that placed Brazilians atop international institutions like the Food and Agriculture Organization and the World Trade Organization.

Yet no country can rely on soft power alone to defend its interests. Indeed, in an unpredictable world, where old threats are compounded by new challenges, policymakers cannot disregard hard power. By deterring threats to national sovereignty, military power supports peace, and, in Brazil’s case, underpins our country’s constructive role in the pursuit of global stability.

That role is more necessary than ever. Over the past two decades, unilateral actions in disregard of the UN Security Council’s primary responsibility in matters of war and peace have led to greater uncertainty and instability. Likewise, little progress toward nuclear disarmament has been made, in disregard of the Nuclear Non-Proliferation Treaty.

Brazil’s abundance of energy, food, water, and biodiversity increases its stake in a security environment characterized by rising competition for access to, or control of, natural resources. In order to meet the challenges of this complex reality, Brazil’s peaceful foreign policy must be supported by a robust defense policy.

Brazil’s National Defense Strategy, updated in 2012, states that the modernization of the armed forces is intrinsically linked to national development. Thus, it emphasizes the need to strengthen the domestic defense industry. In accordance with the Strategy, Brazil is enhancing its conventional deterrence capabilities, including by building a nuclear-propelled submarine as part of a naval program commensurate with its responsibilities in the South Atlantic.

Brazil coordinates closely on defense matters with its neighbors, both bilaterally and through Unasur’s South American Defense Council, which aims to promote confidence-building, transparency, a joint regional defense industry, and, most important, a common defense identity. One potential mechanism for advancing these objectives is a South American Defense College, now under consideration.

To be sure, Brazil’s peaceful foreign policy has served it well. Brazil has used its stature to advance peace and co-operation in South America and beyond. Its constructive stance derives from a worldview that accords pride of place to the values of democracy, social justice, economic development, and environmental protection. Brazil’s unique approach to promoting these ideals is an important source of its soft power

South America is becoming a region where war is unthinkable – what the political scientist Karl Deutsch once called a ‘security community.’ Having visited every South American country in my tenure as Defense Minister, I am convinced that the most effective deterrent on the continent is co-operation.

At the same time, Brazil is pursuing increased bilateral defense co-operation with African partners. With our neighbors on both shores of the South Atlantic, Brazil is working closely to strengthen the Zone of Peace and Cooperation of the South Atlantic (ZPCSA), which aims to keep the ocean free from rivalries foreign to it, and from nuclear weapons.

Brazil is also reaching out to other emerging countries, such as its fellow BRICS, and members of the IBSA Dialogue Forum (India, Brazil, and South Africa). For example, Brazil conducts IBSAMAR, a regular trilateral naval exercise, with South Africa and India. More broadly, we are exploring ways to co-operate in the joint development of defense technologies.

Through such endeavors, Brazil hopes to contribute to a more balanced international order, one less subject to hegemonies of any kind, without losing sight of the importance of mutually beneficial partnerships with developed countries.

Even as Brazil hardens its soft power, it remains deeply committed to the path of dialogue, conflict prevention, and the negotiated settlement of disputes. The presence of Brazilian peacekeepers in countries like Haiti and Lebanon underscores Brazil’s contribution to maintaining peace and security worldwide. In the 21st century, a truly stable global order will depend on a legitimate and effective UN Security Council, one that reflects the plurality of the emerging multipolar world.