The Cult of Courage of Wang Jianlin 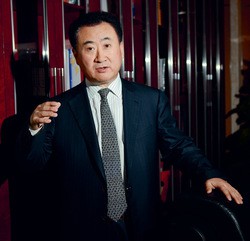 Wang Jianlin, chairman of Dalian Wanda Group, calmly states that he has set a goal of $99 billion (600 billion yuan) in revenue by 2020 for his real estate development company. Just as calmly, he then adds that he’ll retire that year to write his memoirs.

In mid-December, in front of dozens of reporters who had showed up for a press conference on the Wanda Guilin City project, Wang’s sparse hair and bloodshot eyes betrayed a tired man. But he was announcing the launch of a colossal four-billion-dollar (24-billion-yuan) cultural and tourism real estate project that includes cinemas, a shopping mall, a theme park and luxurious hotels. It is the group’s third such project after others in Harbin and Nanchang.

Already, his company has constructed 83 Wanda Plazas – multi-functional malls with entertainment, dining, shopping, hotels and housing – all over China. It also operates more than 50 five-star hotels. Last year, Wanda had a turnover of $23.3 billion (141.7 billion yuan), with net profit over $1.65 billion (10 billion yuan).

Meanwhile, the 59-year-old Wang has been ranked the wealthiest man in China, with $14.4 billion (86 billion yuan) in personal wealth.

Plunging into the business arena

Like his father, Wang became a soldier at the tender age of 15. “It was really tough because I happened to be called for the yeying-lalian military movement, a sort of large-scale winter field training advocated by Chairman Mao at that time and in which youngsters had to endure long marches and camping to hone their body and mind,” Wang says. “In two months, we walked 1,200 kilometers!”

In 1978, Wang was promoted to platoon leader and was recommended to study at a military institute. Though a very determined soldier, Wang was never really good at physical activities such as attacking, creeping and crossing obstacles. “What helped me to endure the hardship of training was my firm belief in revolution and communism,” he says. “I was a fervent advocate of how communism can liberate oneself, as well as all mankind.”

But Wang wasn’t involved in these reforms until 1986. A year before that Deng had ordered China’s military personnel to be reduced by one million, so Wang had changed career track and become an office administrator for Dalian’s city government. Two years later, in 1988, Wang took over the government-affiliated and heavily indebted Xigang Housing Development Corporation. He then obtained a loan from an old comrade working in a bank and made his first big money reconstructing the city’s slums.

As the state-owned Xigang Housing Development Corporation was being transformed into a joint-stock limited company, Wang became general manager and plunged into China’s real estate boom.

“In 1992, seeking one loan, I visited the same bank more than 50 times,” Wang recalls. “I stood outside the bank director’s office at least ten times and the longest time was the whole day. Eventually this still resulted in nothing. It’s impossible to wipe away such a memory in one’s life after suffering so much humiliation. So I told myself I’d be strong, make a brand, and vindicate myself one day.”

He credits his 17 years of military training for his perseverance. “Without those years of experience, I probably wouldn’t have had so much anti-stress capability and so firm a determination.”

To this day, Wang maintains a kind of military discipline. He goes to bed at 11 p.m. and, unlike many Chinese businessmen, he neither smokes nor drinks. Apart from being known for singing Tibetan and Mongolian folk songs in the style of military songs at Wanda’s corporate meetings, he has few hobbies and doesn’t engage in any particular sports.

Obviously, Wang has long since avenged the humiliation. These days, many local governments ask Wanda to come and held them develop. Wang claims that his principle is to “only deal with the officials who pursue a better city.” He also says his company is honest and straightforward. “We don’t bribe officials and, while being close to the government, we stay away from politics,” he says.

When asked his opinion about the Chinese authorities’ recent promotion of ‘diverse ownership’ to boost state-owned enterprise (SOE) reform, Wang says bluntly that private companies should have bigger shares or at least equal shares to SOEs. “Otherwise, it is the private company supporting the SOE,” he says. “I am not that dumb.”

Wealth comes from an adventurous spirit

“Whether or not you make it to Tsinghua and Peking University, or Harvard and Yale, guts are what counts and makes one strong,” Wang told a group of Harvard University students last year. “Wealth comes from the spirit of adventure.” He went on to describe the importance of perseverance, underscoring the point by describing the failure of Wanda’s first commercial real estate project in 2003.

In 2006, the company began cultural tourism projects, which marked a transformation. Further restructuring in 2011 transformed it into a multinational corporation. In 2012, it spent $2.75 billion to acquire AMC Theatres and became the world’s biggest cinema owner. In 2013, Wanda snapped up the UK’s Sunseeker Yachts company and started another hotel building project in London, investing a total of one billion pounds ($1.7 billion).