While politicians on both sides of the Russia-Ukraine conflict continue to keep business communities in a state of suspense, the financial sector is bracing itself for impact. Until now, Europe has been the primary source of long-term investment and a genuine development partner. Finding new long-term investors would be a task that the state and the business community will not be able to accomplish quickly.

The sanctions banning public financing instruments from foreign markets has directly affected key Russian borrowers, including both state-owned and private companies. But the United States and the European Union placed private companies in greater peril by cutting them off from the lending market. Fearful of another wave of sanctions, foreign businesses are reluctant to enter into new contracts with Russia. This applies both to public and private companies and has made interaction between business communities more difficult – not only because of formal sanctions, but also due to a number of informal restrictions. The decisions made by politicians affected not just the ongoing activities of Russian companies, but also their ability to raise the long-term resources needed to foster development. Their access to technologies has also been curtailed.

Up until now, Russia has been convenient for Europe for investment resource diversification. European financial organizations have traditionally had a high concentration of assets with intrinsic risks, which does little good for portfolios, especially now when many EU countries are struggling to maintain economic growth. Russia, on the other hand, with its extractive risks and relatively large financial market, was precisely the kind of tool that many European banks and other financial investors used to balance their investment structure with little to no effort. From this perspective, we used to be a very convenient country for investments. Now these, or other similar risks, would have to be made all over again in Africa, Asia, Latin America, Canada, and the United States. That is why the same European banks would now have to step up their efforts globally to find investment opportunities. European intermediaries will also lose a portion of their clients, along with the commissions they used to receive from Russian issuers.

Today, the share of funds borrowed by the largest Russian banks on the European market through Eurobonds alone is estimated at $50 billion. This accounts for approximately one-quarter of the total foreign debt in the national banking sector. In speaking about alternative capital markets, Russian politicians tend to mention the East more and more often. However, the seemingly easy road to Asia might turn into a bumpy ride. For instance, there are many large companies in China’s financial sector, and they are visible and proactive on the trading floor. Yet they are closely linked with the same European and American businesses that are affected by the sanctions. That is why, when we talk about China, we need to bear in mind that we would have to look for potential investors among purely Chinese companies. Naturally, there are many of those too. The problem lies in the fact that for us this market is absolutely new, unexplored, and, to a certain extent, wild. It is far from what one might call a stock exchange-driven market, and a lot depends on personal contacts and networking. Russian borrowers will already run into their first difficulties building their client base; after all, at this stage, Chinese domestic investors know almost nothing about us. Trips across the country, countless meetings, networking, and socializing (and not necessarily in English, as many Chinese people do not speak it) are all tasks that take up a lot of time. Add to that long distances, regions that are not always accessible by plane, and the poverty that is common for both our countries – all of these factors make this an ever more expensive proposition.

It took us 20 years to get our economic relationship with Europe to the level it is at today. Let us assume we will be able to build relationships with our Asian counterpart more quickly – even so, it will still take time and may well require another 10 years of hard work.

Domestic Russian investors are yet another option that politicians put forth when talking about alternative sources of funding. People started to make money around 2000, and now one can safely assume that this money is still there. Russia has a relatively high level of savings, even with the growing demands from its people. However, an imperfect financial infrastructure and growing risks make the savings barely accessible for Russia’s financial system. The recently frozen pensions provide yet another reason for mistrust. Long-term funds will once again be lost in the short term, ending up in banking accounts or slipped away to overseas banks, perhaps even pension funds. Given this situation, it is difficult to expect that the lack of funds for long-term investments from abroad could be compensated with domestic resources. This means that the demand for externally sourced long-term resources is here to stay, and to avoid a complete investment breakdown, they would have to be proactively sought out.

The banking sector: setting back the clock

Naturally, the sanctions are inflicting damage on current banking transactions. A number of instruments that the business community has now internalized – swaps, forward agreements, and letters of credit – are mostly available from large international banks. By restricting access to these instruments, the sanctions force companies to seek alternate financing, which is often not as quick or efficient. However, minute revenue losses are not the main problem at all. What is worse is that the Russian banking sector will fall backward in a technical sense. While we used to be safe in the knowledge that we could fall back on the Anglo-Saxon system of financing, with its advanced and efficient logistics and well developed infrastructure, today we are forced to take a step back because not all transactions are available to us in the new environment.

In Asia, one of the idiosyncrasies of doing business is the local attitude toward a signed contract. In essence, it is not treated as a definitive document for closing deals. Instead, it is common practice for a contract’s terms and conditions to be modified after the final handshake. If you wanted to force a Chinese businessman to live up to the terms and conditions of a contract signed under Chinese jurisdiction, you would most likely lose in court. Russians have learned to interact with companies in a certain way; these well-oiled mechanisms were developed over the last 20 years within the European domain. We no longer feel comfortable in semi-formal business environments, which is common to Asia and many other emerging markets. The Chinese and Brazilian business cultures are based on a different playbook, which we are not very familiar with; they do not teach these rules in our business schools. We would have to start from scratch to adapt to these new rules.

Furthermore, Russia does not have the tools to sustain its companies abroad. These would have to be developed because no government commission could protect a small or medium size business owner. The same could be said about many larger organizations, but perhaps this is irrelevant. While state-owned companies can be shut down ‘manually,’ privately owned entities could hardly count on that. All of these factors would put a damper on the Russian private sector’s ambitions in the East, or many other emerging economies for that matter.

Undoubtedly, the length of time required for Russia to weaken its close financial ties with Europe and to find a common ground with other regions depends both on the government and the country’s private sector. However, no matter how quickly either side tries to separate, weakening ties with the West will be a gradual process that is likely to take many years. At the end of the day, these ties will never be severed completely – we both need each other too much. 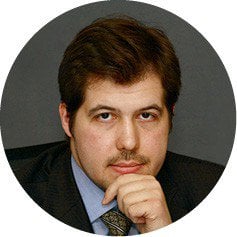