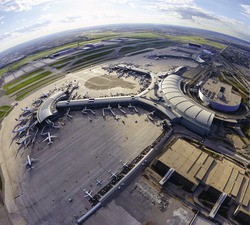 An airport is almost a city in itself, with its own architecture and atmosphere, shops and restaurants, medical centers, and hotels. Passengers with long layovers can practically live in them. Skytrax, a leading reviewer of airline services, surveyed travelers from more than 160 countries and came up with its own list of the top 100 airports worldwide. BRICS Business Magazine picked fifteen of the most impressive airports from emerging economies to highlight here. 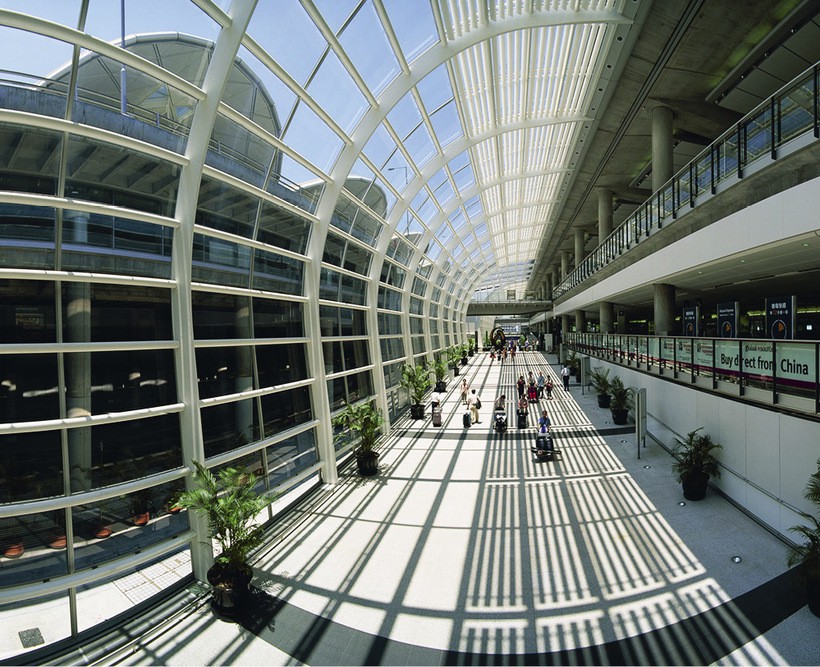 It took six long years and $20 billion to build Hong Kong International Airport, located on the island of Chek Lap Kok. Construction even involved creating an artificial island, and was included in the Guinness World Records as the most expensive airport project ever. It was recognized as one of the 10 most important construction achievements of the 20th century.

Today, this airport is one of the busiest in the world. It works with 100 airlines to service 180 destinations.

The Hong Kong airport boasts a number of cafes, restaurants, and shops. Here, you can find an IMAX movie theater with 350 seats and an aviation center where one can not only delve into the history of aviation, but also try one’s luck as a pilot.

Children can be left in the Dream Come True Education Park, where they can learn the fundamentals of natural science through trial and error. Adults can unwind on the SkyCity Nine Eagles Golf Course, which is a nine-hole golfing facility. 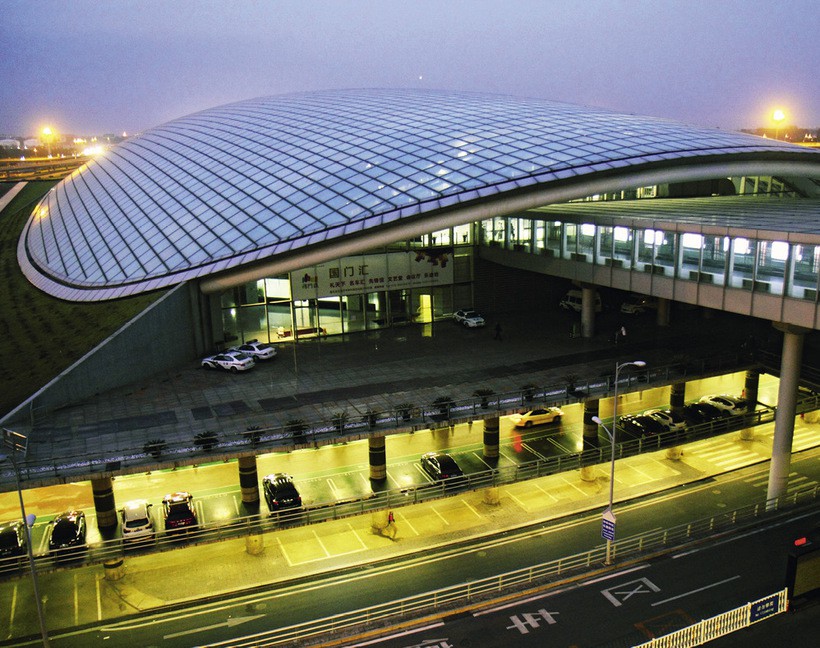 This airport, nicknamed ‘China’s No. 1 Gateway,’ is the busiest in Asia and second in passenger traffic on the planet. Every day, 1,700 flights operated by 92 airlines connect Beijing with 236 destinations around the world. Terminal 3 alone is 986,000m2 and is the second largest of its kind in the world. An electric train that covers 2.5 kilometers in just two minutes connects each terminal. Passengers can also save time by using 243 elevators, escalators, and moving walkways.

A foreign national can spend 72 hours inside the airport without a visa – and without getting bored. Shoudu boasts 130 shops offering more than 60,000 items – from books to bags and watches, and from consumer goods to luxury brands. Those who do not want to take their purchases with them can have them sent anywhere in the world at no charge or collect them in-store on their return flight. While shopping, passengers can leave their children in a childcare zone filled with toys and comic books.

Shoudu is considered one of the most high-tech airports in the world, and the Terminal 3 building is environmentally sustainable. Skylights and glass walls utilize the energy of the sun to provide lighting and heating, and reduce energy consumption when the building needs to be cooled.

In 2010, the airport opened its newest terminal and built a second runway, measuring 3.3 kilometers. The airport is now capable of accommodating the world’s largest aircraft, including the Airbus A380 superjumbo jet. Every couple of minutes, there are free buses that can take people between terminals in just 15 minutes. Hongqiao offers 15 waiting lounges, 18 VIP lounges, and 15 baggage claim belts. There are even a number of nice hotels near the airport. The Shanghai International Airport Hotel allows remote check-in for flights to Japan and has a hotel shuttle to the international terminal. The Shanghai Marriott Hotel Hongqiao, located less than two kilometers away from the airport, offers great fitness rooms for the weary traveler to restore their biorhythms.

This airport bills itself as a cozy spot offering a tranquil environment. At the time it was designed, the concept was to build ‘an airport in a forest with a forest in an airport.’ Kuala Lumpur is surrounded by greenery, and a good portion of the rainforest was replanted in the central terminal to create the perfect marriage of nature and technology. Two terminals are connected by an automated passenger transfer system. In early May, a new low-cost terminal opened its doors, causing a sensation in this market. For those travelers not hunting for bargains, there is a massage and reflexology center where they can relax and recharge. 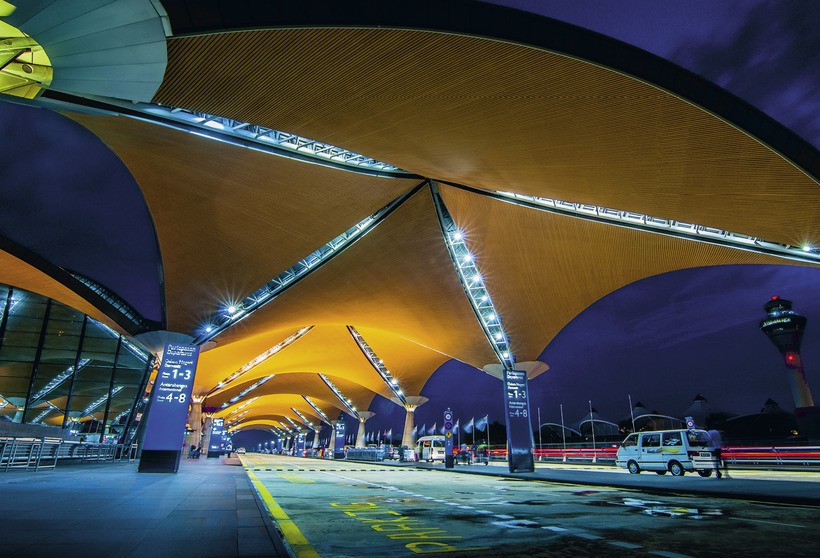 Abu Dhabi’s extravagance starts in the airport with its sumptuous architecture and friendly staff. Travelers can even pre-order an assistant to meet them on arrival, escort them through the airport, help them check-in, and skip the queues at passport control, customs, and baggage claim.

In case of lengthy layovers, Six Senses Spa has soothing treatments specifically designed to improve travelers’ wellbeing. They offer a variety of treatments, ranging from facial and eye care to massages and back support. The Abu Dhabi airport is one of the fastest growing hubs in the world, and efforts are being made to increase its capacity. A new X-shaped Midfield Terminal Complex is being built to meet its growing demand. The building will be commissioned in 2017 and will be able to accommodate up to 30 million passengers per year. 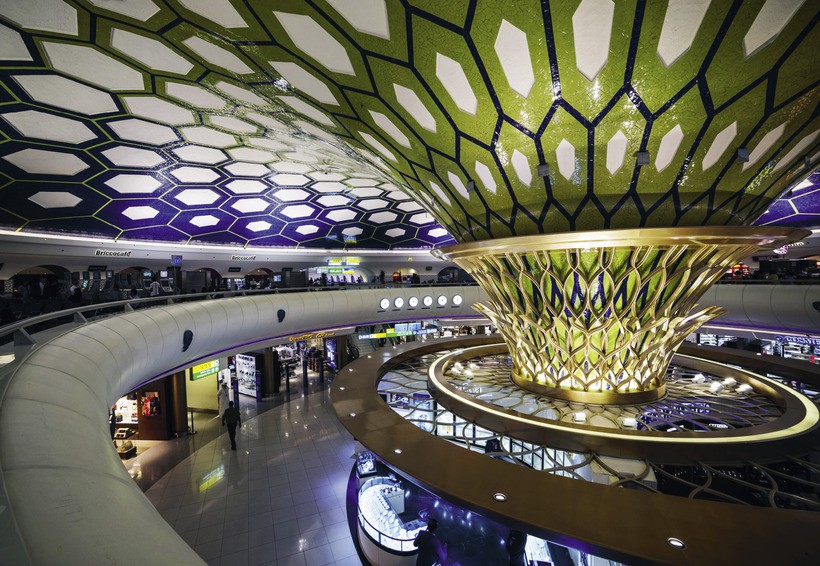 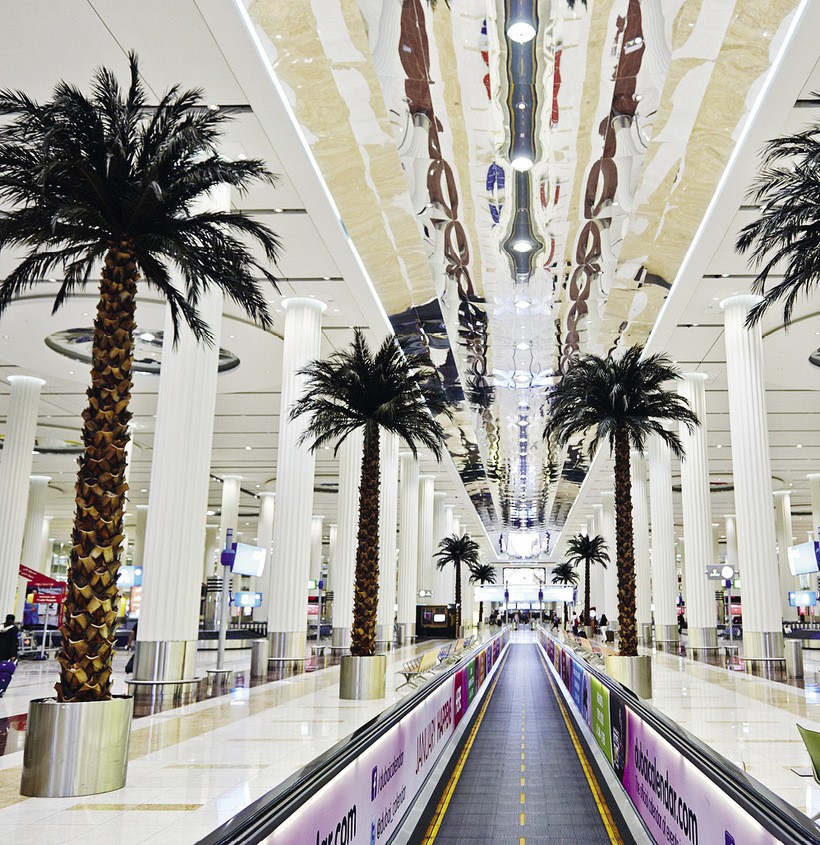 The Dubai airport is famous for having the largest airport terminal in the world. There are three terminals in total, and the city is accessible from any one of them by metro. The local Duty Free is particularly popular; it knows no equals in terms of sales turnover. Among the many cafes and shops that can be found here, there are also some very atypical airport features, including a swimming pool, a fully equipped gym, a Jacuzzi, and a sauna. Or take, for instance, the Zen Gardens where silence and tranquility are in abundance. For passengers waiting for a connecting flight, there is a Snoozecube where they can get a good night’s sleep in a comfortable bed. Each day, 140 airlines operate more than 7,000 flights to 230 destinations, connecting every continent except for Antarctica. By 2020, the airport’s passenger traffic may exceed 100 million people, which is why ambitious expansion plans are already in place.

This is one of the busiest airports in Africa and one of only a few in the world that offers non-stop flights to all of the populated continents. By 2015, its capacity will reach 24 million passengers per year.

The airport is located 1,700 meters above sea level, which has left a mark on its architecture. One of the two runways is the longest in the world (at 4.4 kilometers).

There is a 24-hour chapel for Christian passengers and a prayer room for Muslims.

Located on Africa’s Atlantic coast, this city in the Table Mountain foothills is one of the greatest tourist attractions on the continent. Visitors can take a closer look at Cape Town from the observation tower located on the top level of the main airport terminal. The central terminal offers 10 air galleries, which are the first thing passengers see when they disembark.

The airport hosts a medical clinic and offers baby care rooms in all ladies’ rooms. Hotel Verde is located some 400 meters away from the airport, and its guests can enjoy a swimming pool and fitness center.

The Durban airport opened its doors in 2010. It has 34 aircraft parking spaces, 16 jet bridges, 72 check-in desks, 18 information desks, and 52 points of sale. Airport visitors can benefit from a full range of banking services, rent a car, or enjoy a great variety of restaurants, bars, and duty-free shops. Souvenirs even include beaded crafts and mementos made of sharks’ teeth.

The 3.7-kilometer runway can accommodate planes as large as the Airbus A380. The airport is also proud of its special radiolocation system, which provides information on bird activity near the runway.

The airport’s new international terminal opened its doors in 2013, offering 45 check-in desks, 11 security checkpoints, and two VIP lounges. A broad variety of luxury articles are available from the local shops. The building itself offers a glimpse of the culture and history of China, and specifically Hainan Island. Haikou Meilan is equipped with state-of-the-art runway lighting, baggage handling systems, and communications and navigation equipment.

A brand new terminal is under construction and is expected to be completed by 2020.

This airport, located just 15 minutes away from Lima’s historic center, is considered the best in Latin America. It is relatively small and easy to navigate, even for those who are coming here for the first time. It consists of one terminal and one runway, all signs are in English and Spanish, and the majority of airport staff is bilingual. The airport offers full accessibility for disabled and hearing- or vision-impaired passengers.

Airport guests can also enjoy three 24-hour VIP lounges, where they can watch TV, read a newspaper, or enjoy a drink.

The lower floor is home to a medical center where passengers can obtain vaccinations.

This is one of the fastest growing airports in the world. Over the last 14 years, its passenger traffic has gone up by a factor of 3.5 to reach 51.3 million. The terminal building is designed to ensure a streamlined passenger flow. The airport offers state-of-the-art technologies and automated systems facilitating expedited security, customs, and passport control.

The international departures level is home to the luxurious CIP lounge, where passengers can relax, take a shower, or change their clothes. Entertainment options include television, music, newspapers, a library, a pool table, and internet.

In 2013, this airport’s passenger traffic reached 52.5 million, making it the second busiest in China and the 16th busiest in the world. The third runway is expected to be put into operation soon and the second terminal will open its doors by 2018.

Cutting-edge technologies and materials were used to build the airport. Windows in the main building’s two-tier, curved roof transport travelers into a theater of light and shadow, and after dark the building transforms into a ‘crystal city.’

Bahrain’s main airport has two runways capable of accommodating even the Airbus A380.

A new service called Shop & Collect is particularly popular. Shoppers can buy products before departure and collect them upon arrival. The airport also has three VIP lounges. From the main hall, passengers enjoy a panoramic view of planes taking off and landing. A special room for children even offers the Microsoft Xbox and its latest games.

Passengers can also relax in quiet rooms with lounge chairs, or take a shower. 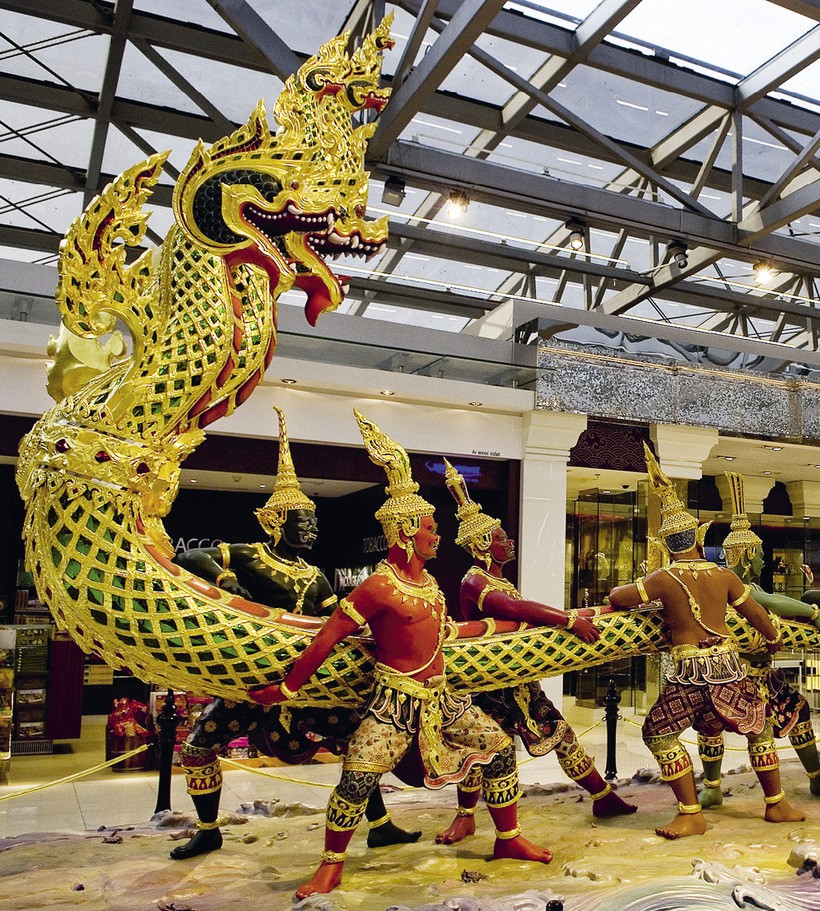 The Bangkok airport can be reached in just 17 minutes by train. Suvarnabhumi is one of the ten largest airports in the world, and is capable of handling 76 departing and arriving aircraft per hour. One terminal services both international and domestic destinations, including regular and charter flights. It has two runways, 120 aircraft parking spaces (five of which are designated for Airbus A380s), and 51 jet bridges.

Novotel Suvarnabhumi Airport Hotel is only a five-minute shuttle ride away or a 10-minute walk through an air-conditioned, underground passage. The hotel offers all modern amenities, plus sound insulation so that plane noises do not disturb weary travelers. The airport also offers free Wi-Fi and lounges for transit passengers. Children can spend time in the fourth floor playroom, where various forms of entertainment and rest are offered. Thanks to its unique design and long, glass and steel corridors, the airport became the most photographed location on Instagram in 2012.