Honest intentions and a full set of the requisite permits are not
sufficient to guarantee that operations in India will go off without a
hitch. Sistema Shyam TeleServices Limited learned this the hard way
when, along with a number of other companies, it lost its mobile
communications licenses last year. But that is not the only lesson the
company has taken from its four years’ experience in India.

When Sistema Shyam TeleServices Limited (SSTL) launched its operations in India in March 2009, the local mobile communications market was peaking: more than 20 million new mobile subscribers were being added every month.

The intense competition, involving more than a dozen serious market players, including several other large international telecoms companies, was one of the most significant factors contributing to the exponential growth of mobile communication services in the country. The hearts and minds of Indian consumers proved to be exceedingly sensitive to the cost of the product on offer, which forced providers to aggressively reduce their prices and expand their geographic coverage. As a result, rates for telecommunication services in India became some of the lowest in the world, with hundreds of millions of local residents covered by mobile telephony and millions enjoying wireless internet access.

SSTL didn’t miss its chance to jump on the bandwagon. In particular, we managed to offer local consumers several concurrent, innovative, products. These included the ‘half a paisa per second’ rate (a paisa is one hundredth of a rupee – approximately 0.016 cents); prepaid broadband mobile data services; unlimited access to popular social networks; and many other services. In 2009 SSTL also launched a broadband service in India under the MBlaze brand, and quickly expanded the service to cover 350 Indian cities. As to the question of how popular this move was, statistics tend to speak louder than words: during our first three years in India the number of SSTL subscribers went from zero to 1.8 million, while the company’s market share exceeded 20%.

The multitude of problems that companies often have to face in virtually every emerging market tend to be particularly salient in India. Therefore it is critical for any business operating in the country to maintain an optimal cost structure. That is not, however, how it works in practice: given the Indian market’s vast scale and diverse nature, many companies often plan for a quick expansion, which tends to result in excessive costs

Our competitors, however, were not far behind. And then, at a time when the country’s telecommunications industry was going through a period of unprecedented growth, on 2 February 2012 the Supreme Court of India issued a ruling terminating 122 mobile communication licenses that had been issued in 2008, including 21 of the 22 licenses held by SSTL.

This came as a shock to all the market participants, who were clearly not ready to deal with such a turn of events. SSTL was no exception, even though we were confident that we had not broken any laws. The company had come to India with the best intentions, and obtained an official license issued by the country’s government after having completed all of the requisite formalities. None other than the Indian government had ratified our investments in full compliance with the country’s legislation.

Be that as it may, neither the petition to re-try the case nor the appeal to reinstate the license, submitted by SSTL, succeeded in reversing the February verdict. Pursuant to a ruling by the Supreme Court, and after having been rescheduled several times, the new auction – for both GSM and CDMA spectrum bands – finally took place in November 2012. In essence it proved to be a flop: because of the unreasonably high initial price, almost no CDMA operators took part in the event, including SSTL.

Our company participated in the second round only after the Indian authorities agreed to halve the baseline license fee. As a result, we were awarded spectrum licenses in eight telecommunications districts in addition to the one license we still had. As a result, SSTL services today cover an area that is home to 40% of India’s population, making the company one of the top three players in the country’s telecommunications market, which we still genuinely believe to hold a great deal of promise.

Despite our various troubles and trepidations, there is one important lesson to be learned from our efforts to acquire mobile licenses: if you want to operate in India, you should always be prepared to face the unexpected. After four years in the local market, we now know that any successful business here is predicated on a great deal of attention to the specific customs and characteristics of this vast and diverse country.

For instance, one should always bear in mind that the multitude of problems that companies often have to face in virtually every emerging market tend to be particularly salient in India, especially against the backdrop of its low-quality infrastructure, tough competition, and growing deficit of qualified human resources. Therefore it is critical for any business operating in the country to maintain an optimal cost structure. That is not, however, how it works in practice: given the Indian market’s vast scale and diverse nature, many companies often plan for a quick expansion, which tends to result in excessive costs.

Another typically Indian challenge is the volatile nature of the local legislative framework, which always remains a ‘work in progress.’ Any company operating in India should take this factor into account in preparing its business plans.

Moreover, given the high level of competition in the Indian market, revenues can hardly grow without innovative business models. This is not a whim; it is a bare necessity. Placing more emphasis on variable costs models in every business segment will considerably improve your efficiency.

Finally, it is equally vital to maintain maximum flexibility in pursuing your business plans. Bear in mind one thing: whatever enables you to succeed in other markets will not necessarily work in India. In other words, here you must think globally and act locally, taking into consideration the enormous size of this country as well as its diverse and ‘patchy’ population.

Vsevolod Rozanov is President and CEO of Sistema Shyam TeleServices Ltd.,
a subsidiary of Russia’s Sistema JSFC in India. 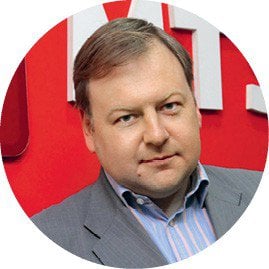