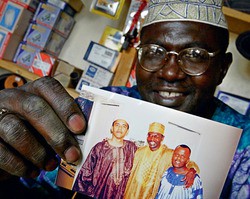 He’s had 12 wives, is accused of beating one of them, and wants to be President (of Kenya). Meet Obama’s very outspoken sibling

For the briefest moment, Malik Obama’s eyes reflect resentment through the lenses of his metal-framed glasses.

He is fed up with people criticising him for trying to cash in on his younger half-brother’s famous name. “It’s also my name and my birthright. Let’s not forget that I was born before him,” he says.

Barack may have made history as the first black President of the United States, but he is not, Malik suggests, the only member of the family destined for greatness.

For it was drummed into Malik, from a very early age, that he was special and therefore expected to make his mark in this world.

“My father instilled that in all of us,” he says. “He used to say, ‘No matter what, you are the very best, because I’m from the best stock. Always keep that in your mind.’

“And, to be honest, sometimes the only thing that has kept me going was the fact that I’m an Obama; therefore I am somebody.”

Last week, the 54-year-old was forced to fall back on this restorative mantra after suffering a crushing defeat in his bid for political power in Kenya.

He stood as an independent candidate for the governorship of Siaya County in the national elections.

As if that humiliating public drubbing wasn’t enough to contend with, Malik – a practising Muslim – also faces allegations that he is a wife-beater and a philanderer who seduced 17-year-old Sheila Anyango with sweet words and a gift of £24, then made her his 12th wife when she was under the age of consent.

She has said: “Marrying him [three years ago] has been the biggest mistake of my life. He beats me, but mostly he’s just nasty and quarrelsome.” She is not the first spouse to accuse him of abuse.

I find Malik licking his wounds at his base at the Barack H Obama Recreation And Rest Area on the outskirts of Kogelo, the dusty, remote village that is the family’s ancestral home.

The squat building complex is empty. Despite its grand-sounding name, it is little more than a highway pit stop aimed at passing trade.

Casually dressed in a loose shirt, jeans and tan polished shoes, Malik lumbers into the main restaurant section. He is 6ft 4in tall, heavy-set, walks with a slight stoop and grips my hand in a statesman-like double handshake.

He and Barack may share the same father but they have no shared physical features. Nor is he, according to those who heard him on the hustings, a good orator.

But the brothers do share a bond, forged from their first meeting, in adulthood, 27 years ago. They were best man at each other’s weddings and remain in regular contact – especially as both now live in Washington, D.C.

Malik describes Michelle Obama as a “great First Lady” and says he has visited the White House on numerous occasions, as have other members of the Obama extended family.

For all his political inexperience Malik is convinced he is the man to end corruption, rampant poverty and financial mismanagement in Kenya. He says: “Don’t be surprised if, in five years’ time, there is another president with the name Obama.”

“I see my brother privately at least once a year, when I go to visit him in the White House and say hello. It’s like visiting a working national monument, such as the Smithsonian or Buckingham Palace. But he’s always at the end of a phone line if I want to talk.

“I last saw him on November 19 last year, shortly after the U.S. election. I went to the White House and offered him my congratulations.

“We are close but don’t live in each other’s pockets. I don’t have to be at every big party. I’ve not seen Michelle in a while. I saw her and the children at the last inauguration, but it was very busy, so we didn’t have time to talk. I can’t say that I have a relationship with my nieces.”

An accountant by profession, Malik describes himself as an independent financial adviser for several American and international companies.

He complains that he is maligned and misunderstood because he is a Muslim and a black man. His voice is deep, with an American twang – he has lived in Washington since 1985 and divides his time between there and Kogelo.

“Having a famous brother has made me a target of hatred, racism and bigotry against my religion,” he says. “I recently asked Barack what advice he could give me about dealing with all the negativity. He just laughed and replied, ‘You’re a big boy. You’re my elder brother, you can take it. Anyway, it’s only four more years.’”

By then Malik is hoping to have raised enough money to make a bid for the Kenyan presidency, due to be contested in five years.

Some might question his motives, but he says Barack has been encouraging. “Back in 2011, when I told him about my plans, he said to go for it. His only advice was that I should be honest, sincere – and to have a thick skin.”

Malik reveals how he once tried to use his family ties to change the shape of international politics – by pleading with his brother to save Libya’s Colonel Gaddafi after his people turned against him in 2011.

“I went to see my brother and I said look, this is somebody I know and it’s terrible what is going on. Let’s see if we can talk to him and find some kind of rapprochement. He wasn’t interested.

“He didn’t want to know, which was very disappointing. But he did tell me that he shook Gaddafi’s hand when they met at a conference in Rome.”

Then he chides Barack for not doing enough to help his Kenyan relatives.

“I’m very proud of my brother, but I would like for him to do a little bit more for the family on this side. I would like to say he could send some money. I give money when asked. That’s what family is for. We’re not well off, though people think we are.”

He is eager to position himself as patriarch. It is, he says, his right as the first-born Obama sibling.

Malik was just one in 1959 when his father, Barack Obama Senior, left his wife Kezia to take up a scholarship at the University of Hawaii. Malik’s sister Auma, two years younger, appears to have been conceived when his father was home on holiday. Kezia, now 72, later studied in America and lives in Bracknell, Berkshire.

In America, Barack Sr met and married Ann Dunham, an anthropologist from Kansas. But soon after she gave birth to the future U.S. President he abandoned her and returned to Kenya.

There were other women and other children, before he descended into alcoholism after a car crash left him disabled. The President is said to have struggled to come to terms with the fact his eight brothers and sisters have four different mothers.

Malik recalls: “My father came back in 1964 and we lived here in Kogelo, before moving to Nairobi. He was the senior manager at the Kenya Tourist Development Agency, which was a very good job. We had the very best of everything – a nice car, a lovely house, and servants.

“But we lost it all after the accident in 1971 because he couldn’t work. I was going to one of the best private schools, but I suddenly I had to walk ten miles to get there.

“There were times when we didn’t even have money for food. I had to scrounge meals from family members. It was tough to see my father’s disintegration. He died at 46, without ever realising objectives. Just by being alive I’ve already achieved something he didn’t.”

After graduating from the University of Nairobi with a degree in accountancy, Malik worked in Nairobi until 1985, when he moved to America.

“Barack made contact soon after I started living in Washington and flew from Chicago, to meet me,” he says. “I knew about him from the beginning, because my father used to talk about him a lot.”

Malik, who runs a small electronics shop a half-hour’s drive outside Washington, says there is nothing wrong in using his name as a force for change – but he adds that his brother’s family is not involved.

“They’re hands-off,” he said. “They’re not involved in what I’m doing. He’s doing his thing, he’s the President of United States. I am Malik Obama, doing this thing.”

But there have been questions about where the money has gone. A probe was launched over cash owed to the U.S. taxman from his fund-raising activities. Much of the money raised had come from Malik’s Muslim connections in Saudi Arabia, Libya, Sudan and Yemen.

“These people were happy that my brother is the President of the United States,” he says. “So they invited me to conferences. I saw it as a chance to use my name in a good cause.”

He especially liked Gaddafi, whom he met about half a dozen times.

Moving on to the accusations about his domestic life, he vehemently denies the claims against him.

“I don’t beat my wives, as has been alleged. It’s all b******t. I categorically deny the allegations said to have come from my wife,” he says.

“Sheila went back to her mother’s home the other day after she had a row with a co-wife in the family compound. I don’t wish to go into the details, but it was between the two women, nothing to do with me.

“She came to the polling booth with me last Monday and said she still loves me. I’m sure she will be home when she’s ready.”

One local man told me later that it was common knowledge that when any of his wives becomes “troublesome” or demanding she is “let go.”

Malik insists he is a fair man. “There have been 12 wives since my first marriage in 1981, when Barack was my best man. I have done my best with all of them, along with the children.” He won’t, however, say how many he has.

When I ask about the reactions of the President and First Lady to his polygamous life, he shrugs and grins slyly. “They’ve never commented to me about it. They keep their thoughts on such matters to themselves. But they are happy that I’m a proud Muslim.”

And there is indeed some evidence for that. In his memoir, Barack recalls the wedding day, writing: “The person who made me proudest was Roy [the name he uses for Malik]. He converted to Islam, and has sworn off pork and tobacco and alcohol. [His] new lifestyle has left him lean and clear-eyed.

“At the wedding he looked so dignified in his black African gown with white trim and matching cap that some of our guests mistook him for my father.”

Malik says: “Some people go on about me being a Muslim, as if it somehow impacts on my brother’s politics. That is my faith, not his, but he respects it.

“I would describe my relationship with Barack as a normal brotherly one, except that he’s got a country to run. And I think he’s doing a very good job on that score.”

For all his political inexperience Malik is convinced he is the man to end corruption, rampant poverty and financial mismanagement in Kenya. He says: “The Obama name will help to attract the kind of international investment that would bring industry and jobs.

“I am already showing the way through my foundation. I’m building concrete bridges in the village, putting up power lines, providing homes for widows.”

He hopes his running for governor will have raised his international profile. “I’m not deterred by this initial political setback,” he says.

“Don’t be surprised if, in five years’ time, there is another president with the name Obama.”