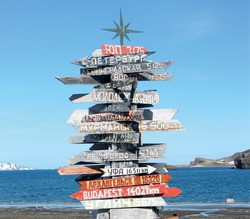 By the end of last year, capital investments in Russia were up 6.6% – nearly double the country’s economic growth rate. Foreign direct investments (FDI), on the other hand, have only gone up 1.4%.

The lion’s share of these investments is funneled to just a few areas, primarily the Moscow agglomeration, St. Petersburg, and adjacent areas. They understandably attract investors with their own markets, well-educated workforce, and developed infrastructure. According to Ernst & Young, the two cities accounted for 42% of the total number of projects funded through FDI in Russia from 2007 to 2011. Foreign investors are also quickly getting a foothold in the Kaluga and Nizhny Novgorod ‘oblasts’ (provinces), as well as in the cities of Kazan and Yekaterinburg. Other traditional centers of gravity include areas, such as the Sakhalin and Arkhangelsk oblasts, which are rich in natural resources.

However, if we look at the overall investment activities picture, there will be a lot more bright spots on Russia’s map. BRICS Business Magazine finds that the Belgorod, Voronezh, Tambov, Astrakhan and Orenburg oblasts, as well as selected other regions, show positive capital investment indicators on a per capita basis. At the same time, the level of per capita FDI in these places remains relatively low compared to the average statistics across the larger federal districts and Russia as a whole. This goes to show that Russian entrepreneurs are gaining more confidence exploring new territories, capitalizing on advantages such as a relatively inexpensive workforce, promising markets, and interested local authorities. But it also shows that foreign investors are missing out on an opportunity to beat their Russian counterparts to the punch. What is more, even in the areas that have already seen considerable interest from foreign investors (such as Tatarstan, Nizhny Novgorod, Siberia and Primorye), their presence could have been even greater considering the overall level of business activities. It would behoove foreign investors to start thinking about expanding their horizons: there is a great deal of potential waiting to be tapped in the Russian hinterland.