Russian universities are less efficient when it comes to their interaction with real sectors of the economy compared to their counterparts in India, China, and Brazil. That was the conclusion reached at the World Economic Forum. The city of Tomsk saw an opportunity and is now working to change its entire environment – bringing on board both science and business.

Three years ago we held the first of our ‘investment sessions,’ which are meetings between the city’s business community and its administration. Both the entrepreneurs and the public servants found the format rather unorthodox, which is perhaps why each of them initially spoke only of their own problems. However, no one was surprised when both sides agreed on one point – that Tomsk will continue to develop as long as students keep coming here. If the city’s universities became less attractive, the entire economy built on small and medium-sized businesses would collapse. This premise brought us closer to our main idea – to build a University City.

The notion has a clear definition. In the first place, the city centre and the university campus are one and the same. They would not be located in different areas, and university management would assume part of the responsibility for the city’s spatial development and even its overall strategy. The Mayor would be a member of the professors’ club – a body that not only holds discussions but also formulates decisions.

Secondly, the university’s economy would be recognised as a major city budget contributor, with many processes rebuilt to match that model.

This interpretation of the University City idea has become generally accepted across the globe. Perhaps Russia’s system of budget revenues would not allows us to fully meet the second criterion, and our universities would not be able to contribute directly to cover urban development costs, but this does not render the idea entirely obsolete. To put it in simpler terms, what makes a University City stand out? It is the fact that students from other regions would gravitate here. They would be able to spend the five years of their degree not in one building – no matter how well designed – but in an entire city full of students. And they would not worry about how to spend their free time, because a diverse cultural life and intense business activities are part and parcel of a place like that. Oxford perhaps would be the most obvious example of this kind of city.

Today we are working on a project to integrate all six universities into the city environment. The work primarily involves organising transportation flows and pedestrian zones to ensure that student campuses remain open to the city and become closer to one another. This new Tomsk, reminiscent of a traditional campus with its own botanical garden, bicycle lanes and the required support infrastructure, is not just another socially attractive idea: It is a business story that holds a great deal of promise.

Each student should be viewed as a small-scale investor in the local economy. Many of them would take part in developing local businesses not just as consumers, but as bona fide entrepreneurs, opening cafés and shops and offering IT services. We are doing everything we can to foster their ability to convert their knowledge into a commodity that can be sold. Our universities have launched their own business incubators, while local companies have long been prioritising science and education.

Today it has become a common occurrence that students used to Tomsk’s comfortable lifestyle and better opportunities are bringing their parents here from Krasnoyarsk, Omsk and Kemerovo. Last year 15,000 migrants contributed to the city’s population growth, a figure twice as high as two years ago, which beyond any doubt has a positive effect on the economy.

Even the city’s international relations are predicated on the interests of its universities and the education process itself. For instance, let us take a simple question – how does one select and interact with sister cities? Our students came up with a tip which has become essential – talking with other students from different countries. Our universities now practise exchange programmes which ultimately offer our students a chance to get a double degree. Our good partners include the University of Wrocław, the oldest academic institution in Poland; the famous Henri Poincaré University in Nancy, France – a fine example of a perfectly developed student infrastructure fostering research; and the University of Ulsan, South Korea.

Tomsk has been quite successful in meeting Russia’s demand, and perhaps even the world’s demand, for highly qualified scientists and technical specialists. However, getting a foreign investor to become a permanent resident is a far more daunting task. Hi-tech companies might already be aware that this city has plenty of young professionals with a lot of knowledge and great ambitions. Now it would behove them to learn about the city’s rare infrastructure, with its dual status as special economic zone and industrial park.

Anatoly Chubais, head of RUSNANO, recently noted that science and education in our region are perfectly in sync with the development of its rich fuel and energy complex. Therefore, considering that the timing matches the location perfectly, the only logical choice would be to use the resources of oil and gas companies to finance innovations and development specifically here in Tomsk.

These companies already commission studies at our universities and research facilities for the simple reason that they are ready to implement the results. As always happens in such cases, the results of scientific and technical research tend to transcend one area of application, which makes the city attractive for students specialising in different fields – and of course for various businesses. Things are evolving at a very fast pace. Today, in 2013, Tomsk is not yet the University City it strives to be – but it has a vision, it has capabilities, and it has a clear grasp of what needs to be done to get there. 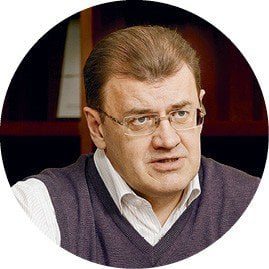 Head of the Tomsk City Administration