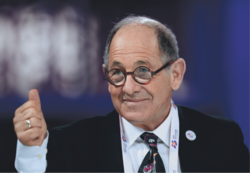 Head of Mobilium Global Group Ralph Simon believes that we are standing on the threshold of a new era, one in which mobile technology will be present in all aspects of our lives. In an interview with BRICS Business Magazine, this guru of the mobile industry shares his opinions about the future and the role emerging countries will play.

You are known as ‘Father of the Ring Tone,’ though it was not the only thing you invented. Which of your innovations do you consider your best?

At the moment, one of the most interesting ones, which I think has had the most social impact, is the first ever Pan-African health delivery network. It is effectively providing African countries with the first ever diagnosis and health treatment mobile device. The key component is that it costs a consumer as much as a bagel, which means it effectively costs nothing. There are 54 countries in Africa, and this project has been launched in nine of them. We are also working closely with the World Health Organization and using this platform to help them with the Ebola crisis. There is a huge problem for healthcare workers and nurses in the field; if they could use the device to work more easily with patients, young mothers, and new-born babies, then that’s a good and much needed innovation.

The other invention is connected with the mobile games area – looking at games being educational. I met with a guy who is from ‘Angry Birds’ in Helsinki. Finland is known for having the best education system in the world. So they are taking their education and ‘Angry Birds,’ mixing them together, and creating new ways for people to learn so that education and learning become fun.

Talking about mobile technologies, what is the most exciting thing about them today?

I think that it is a whole new range of applications which can recognize what is going on in your body. They are called ‘insideables.’ You take a little pill, which contains a tiny radio frequency chip made from vegetables. You swallow that pill and wear a special patch on your arm, which talks to the insideable. It can send messages to your phone, or to your doctor, nurse, or another medical specialist, to tell them what is going on inside you.

Is this going to be widely available in the near future?

It has just started to happen in Silicon Valley. An international team of specialists from different countries, including Russia, is working on this issue now.

As you know, Russia has some incredible innovation technologists – not just in Moscow, but in places like Novosibirsk and Tomsk. I hope that the Russian Minister of Communications and Mass Media, Nikolai Nikiforov, understands that you can bring amazing inventions to this world. It will require a lot more stimulation of the innovation communities across Russia, but the innovation potential of this country is unbelievable – the best in the world. In fact, I am a big fan of Russia; I love this country very much.

Can you specify what kind of innovations in Russia you find inspiring? What is the real future that you see in Russian technologies?

Telemetry. And personal telemetry, which is what insideables are. You can wear a little bracelet that tells you what your blood pressure is, and a lot of people are working on expanding that issue now. In terms of engineering innovations, Russia is coming out with Yotaphone, which is its own mobile device.

A study conducted last year showed that people look at their phones 150 times a day. But in the last 12 months, the amount increased to 200-220 times a day, which means about 10 times every hour, or once every six minutes. That is why people of all ages are now being called ‘screenagers.’ We are now making a step into a new era, that of the ‘screenage’ generation. One of the questions that arises is how it will impact social interactions between people. We still don’t know what is happening as a result of people using their phones so often

The big problem in Russia, I think, is that the small groups of innovators do not have as many opportunities for funding. One of the reasons Silicon Valley and Israel are the two most important areas in the world in terms of innovation is that they have very well developed innovation finance – money to give to young people to start companies.

I can give you a good example. Nokia was a very big mobile company, and it employed the best people in Finland from cities across the country. When Nokia collapsed, 20,000 people were out of a job, and so the government started to develop special innovation areas for them. That guy from ‘Angry Birds’ told me that five years ago he gave a speech at the Helsinki School of Economics and asked the class. “How many of you hope to have your own start-up?” Only three people raised their hands out of a class of 200 people. Five years later, he gave the same lecture at the same university in front of another 200 people; that time, 110 students raised their hands. Now if you have a start-up doing original work, the government will give you money and cover your expenses – it is stimulating a whole culture of innovation.

Talking about Russia, Kazan is a very good example of an innovation city. Vladivostok could become one; there could be a whole lab on cold climate technologies innovation. It is very specialized and very important, particularly because of the effect of climate change. In the near future, the summer weather is going to be much hotter in cold areas – it will be Irkutsk, not Sochi, that will be a good place to go to on summer holidays.

What about the mobile industry? Are there going to be changes there as well?

What do you predict for the future of the phone?

Massachusetts Institute of Technology in Boston has been experimenting with a cell phone where you don’t need to touch the phone, but if you put a certain button on your hand the keyboard will appear. So you can make your phone work by touching your hand, all because of a certain kind of projection interface. The phone of the future will have more to do with health and wellness, it will be a wallet for your money, and it will know your tastes. You won’t be able to marry the phone, but it will certainly have a lot of personalized services.

A study conducted last year showed that people look at their phones 150 times a day. But in the last 12 months, the amount increased to 200-220 times a day, which means about 10 times every hour, or once every six minutes. That is why people of all ages are now being called ‘screenagers.’ We are now making a step into a new era, that of the ‘screenage’ generation. One of the questions that arises is how it will impact social interactions between people. We still don’t know what is happening as a result of people using their phones so often.

And which devices do you think will become outdated?

PCs. People will mostly use tablets, and other iPad-style devices. Mobility will play the most important role, and it already does. Most people are on the move all the time and modern lifestyles are very active, especially in the BRICS countries.

What role do BRICS countries play in the mobile technology world?

Within Africa, I am on a board called the African Leadership Network. It is a group of the smartest digital innovators and business leaders, working together in what is called The New Africa. It is based on countries of new innovators like Kenya, which created mobile money, and Rwanda, where the president will not start a cabinet meeting until every minister has an iPad in front of him and switched on.

South Africa has the biggest economy in Africa, and it works very closely with China. Now there is a new BRICS development bank and $200 billion have been allocated to fund this bank. This bank is going to be a kind of link between South-South and Russia, a solid link for Russia’s long-term relationship with India. India’s technologies are the most important in all of the BRICS countries; they have big companies, like TATA, that are doing an incredible job.

BRICS countries are very suitable for new mobile technologies, as they can skip over the old ones. I think Russia will play an incredible position in the next phase with ‘The Internet of Things,’ that is to say machine-to-machine connections.

There are 7.2 billion mobile phones worldwide, but there will be 50 billion machine-to-machine connections this year. It is exactly this area where Russia has incredible academic skills and knowledge.

You mentioned Santiago and Bogotá as leading mobile tech centers in Latin America. What other Latin American countries lack smart technology development and could introduce it into their lives?

Costa Rica is developing some important tech hubs. Mexico has good technology. Brazil, of course, has size and special knowledge, especially in São Paulo. But Colombia and Chile seem the most innovation-friendly.

Russia offered to consider the possibility of granting Argentina membership to the BRICS group. However, the country’s economy is struggling. How could a mobile app help an emerging economy? Do you have any examples?

Argentina could and should be a member of BRICS, but their economy is faltering and there is political instability. Funding for innovation and R&D is lower than in other key Latin American countries, like Brazil. Of course, there are many mobile apps applicable to Argentina that are working there right now. It is going to be important to see the implementation and rise of mobile wallets and mobile money; maybe this will be one of the many tools that the government and public consumers will need to try in order to improve the Argentine economy. The big telecommunications operators are there, and they are fostering growth, but the country remains an economic straggler.

If one looks at which areas off the world are consistently creating the greatest innovations and where some say there is a special nationality, it would have to be Silicon Valley. So much is created, invented and developed in Silicon Valley – it has the highest number of patent registrations in the world. Second only to Silicon Valley is Israel, whose start-up communities are prolific and bring about a host of new innovations all the time – so much so that this country is the second leading place in the world for developing and registering new tech patents. Technologies don’t have a nationality – Russia is great at developing strong mathematical skills and technologists, but Moscow lags as an incubation city due to a number of issues not being addressed effectively by Russia and the Moscow city government.

You mentioned the potential for unifying Russian and African technologies. What did you mean?

There is amazing potential for linkages to be established between hot new Africa start-ups in Kenya, South Africa, and Nigeria, and top Russian companies from across the country. In Africa, contextual realities particular to each country are key factors. For example, something that works in Russia might not work in Zimbabwe or Kenya. Local culture, tradition, and usage vary between countries. However, Russian tech mastery and effectiveness has a definite place in Africa. Russia should be creating more initiatives and projects that bring together Russian and Africa technology and tech screenagers.

In one of your interviews, you mentioned the importance of smart cities and their security. Can we say that Russia, with its ‘Safe City’ system that was used at the Olympic Games, is an example of future safe technology?

This was groundbreaking technology, proving once again that when Russians put their minds, souls, and technologies into big projects, they can have an incredible impact and create platforms of creative brilliance!

Head of the Mobilium Advisory group