Market bubbles are not unlike epidemics. They grow and subside, but they are never over. Like in short novels, nobody knows what to expect in the end.

Nevertheless, I was not expecting a bubble story when I visited Colombia. But, once again, people there told me about an ongoing real-estate bubble, and my driver showed me around the seaside resort town of Cartagena, pointing out, with a tone of amazement, several homes that had recently sold for millions of dollars.

The Banco de la República, Colombia’s central bank, maintains a home price index for three main cities: Bogotá, Medellín, and Cali. The index has risen 69% in real (inflation-adjusted) terms since 2004, with most of the increase coming after 2007. That rate of price growth recalls the U.S. experience, with the S&P/Case-Shiller Ten-City Home Price Index for the U.S. rising 131% in real terms from its bottom in 1997 to its peak in 2006.

This raises the question: just what is a speculative bubble? The Oxford English Dictionary defines a bubble as “anything fragile, unsubstantial, empty, or worthless; a deceptive show. From 17th century onwards often applied to delusive commercial or financial schemes.” The problem is that words like ‘show’ and ‘scheme’ suggest a deliberate creation, rather than a widespread social phenomenon that is not directed by any impresario.

Maybe the word ‘bubble’ is used too carelessly.

Eugene Fama certainly thinks so. Fama, the most important proponent of the ‘efficient markets hypothesis,’ denies that bubbles exist. As he put it in a 2010 interview with John Cassidy for The New Yorker, “I don’t even know what a bubble means. These words have become popular. I don’t think they have any meaning.”

One problem with the word ‘bubble’ is that it creates a mental picture of an expanding soap bubble, which is destined to pop suddenly and irrevocably. But speculative bubbles are not so easily ended; indeed, they may deflate somewhat, as the story changes, and then reinflate

In the second edition of my book Irrational Exuberance, I tried to give a better definition of a bubble. A “speculative bubble,” I wrote then, is “a situation in which news of price increases spurs investor enthusiasm, which spreads by psychological contagion from person to person, in the process amplifying stories that might justify the price increase.” This attracts “a larger and larger class of investors, who, despite doubts about the real value of the investment, are drawn to it partly through envy of others’ successes and partly through a gambler’s excitement.”

That seems to be the core of the meaning of the word as it is most consistently used. Implicit in this definition is a suggestion about why it is so difficult for ‘smart money’ to profit by betting against bubbles: the psychological contagion promotes a mindset that justifies the price increases, so that participation in the bubble might be called almost rational. But it is not rational.

The story in every country is different, reflecting its own news, which does not always jibe with news in other countries. For example, the current story in Colombia appears to be that the country’s government, now under the well-regarded management of President Juan Manuel Santos, has brought down inflation and interest rates to developed-country levels, while all but eliminating the threat posed by the FARC rebels, thereby injecting new vitality into the Colombian economy. That is a good enough story to drive a housing bubble.

Because bubbles are essentially social-psychological phenomena, they are, by their very nature, difficult to control. Regulatory action since the financial crisis might diminish bubbles in the future. But public fear of bubbles may also enhance psychological contagion, fueling even more self-fulfilling prophecies.

One problem with the word ‘bubble’ is that it creates a mental picture of an expanding soap bubble, which is destined to pop suddenly and irrevocably. But speculative bubbles are not so easily ended; indeed, they may deflate somewhat, as the story changes, and then reinflate.

It would seem more accurate to refer to these episodes as speculative epidemics. We know from influenza that a new epidemic can suddenly appear just as an older one is fading, if a new form of the virus appears, or if some environmental factor increases the contagion rate. Similarly, a new speculative bubble can appear anywhere if a new story about the economy appears, and if it has enough narrative strength to spark a new contagion of investor thinking.

This is what happened in the bull market of the 1920s in the U.S., with the peak in 1929. We have distorted that history by thinking of bubbles as a period of dramatic price growth, followed by a sudden turning point and a major and definitive crash. In fact, a major boom in real stock prices in the U.S. after ‘Black Tuesday’ brought them halfway back to 1929 levels by 1930. This was followed by a second crash, another boom from 1932 to 1937, and a third crash.

Speculative bubbles do not end like a short story, novel, or play. There is no final denouement that brings all the strands of a narrative into an impressive final conclusion. In the real world, we never know when the story is over.

Robert J. Shiller is 2013 Nobel Laureate in Economics, Sterling Professor of Economics at Yale University, and co-creator of the Case-Shiller Index of U.S. residential real estate prices. He is the author of Irrational Exuberance, the second edition of which predicted the collapse of the real-estate bubble. 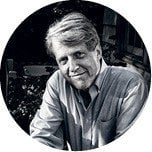