The educational landscape is shifting in front of our very eyes, and the changes are irreversible. Not all traditional academic institutions are likely to survive: they will have to either radically adapt, or die. They will be replaced by new, progressive, high-tech education projects, known in the expert community as ‘greenfield.’

What is education going to be like in the future? To respond to this question one inevitably has to ponder the fate of existing academic institutions in light of new threats and challenges. And there is quite a bit to ponder.

Today there are over 19,000 higher education institutions worldwide. Will they be able to adapt to the growing trend of internationalisation in education, and reverse the annual flight of the four million most talented students to the world’s top 500 universities? Are the leaders of existing academic institutions capable of responding to the unfolding digital revolution and the growing competition from new online projects – Coursera, EdX, Udacity and others – that are building ‘online universities for millions’ with free access to courses offered by top professors and experts? Who will pay for the development of traditional academic institutions given the high debt burdens and budget deficits facing many countries, and corporations’ shrinking education budgets?

It is not only the leaders of academic institutions who are forced to find answers to these questions. Entire regions and countries today run the risk of missing out on a growing trend and ending up on the academic periphery. This threat also holds true for the BRICS countries.

According to experts, this avalanche of innovation is likely to seriously change the landscape of education across the globe. A brighter future is no longer guaranteed for traditional academic institutions. There simply will not be enough resources for everyone. Education in the 21st century is confronted with an administrative challenge unprecedented in terms of both scale and complexity: the transformation of tens of thousands of educational enterprises whose activities benefit over 100 million people, and whose annual budgets are estimated to total in excess of $2.3 trillion in OECD countries alone. To stay in the education space, leaders of these institutions will have to take urgent measures to adapt to the new economic environment. This is a gargantuan challenge; after all, many of these institutions were not intended as economic entities, nor are they managed as such.

However, successful transformation is more like-ly to begin as an exception rather than a rule. This reconstruction of the existing platform is a bit like trying to overhaul a faulty engine on a car driving at full speed. As well as a well-thought-out plan and a high degree of professionalism on the part of the management team, one also needs to be in the right place at the right time. Lacking these elements, past attempts to transform academic institutions have run into systemic inertia and centuries-old resistance to change, ultimately managing only cosmetic improvements to existing models.

Without denying the importance of large-scale transformations, we believe the very logic behind the discourse on the future of education should change as well.

Given the broad range of different trends and exter-nal factors – primarily of a technological kind – there are new opportunities for the education industry. It is likely that new market niches or zones will emerge for experiments in education, develo-ping in parallel with traditional systems.

In an analogy with land development, traditional academic institutions may be described as ‘brown-fields’: legacy areas of academic practice. New educational projects – start-ups created from scratch with foundations in educational technology (or ‘EdTech’) – emerge as ‘greenfields.’

Over the last ten years, a new market for education initiatives has started to take shape, attracting significant financing. 2010–2012 saw a veritable boom, with investments tripling from $350 million to $1.1 billion. Compared to 2002, the total volume of investments has increased nearly tenfold

However, the very existence of these greenfields still needs to be proved. The main criterion would be a critical mass of such projects not only becoming popular with users, but also managing to raise significant funds from investors.

An analysis of venture investments in academic start-ups shows that, over the last ten years, a new market for education initiatives has started to take shape, attracting significant financing. 2010–2012 saw a veritable boom, with investments tripling from $350 million to $1.1 billion. Compared to 2002, the total volume of investments has increased nearly tenfold (see diagram). These statistics point to a significant increase in investor appetite for academic start-ups, which supports the premise that a new educational development space is emerging. Academic greenfields are well on their way to becoming the main driver behind the education of the future. 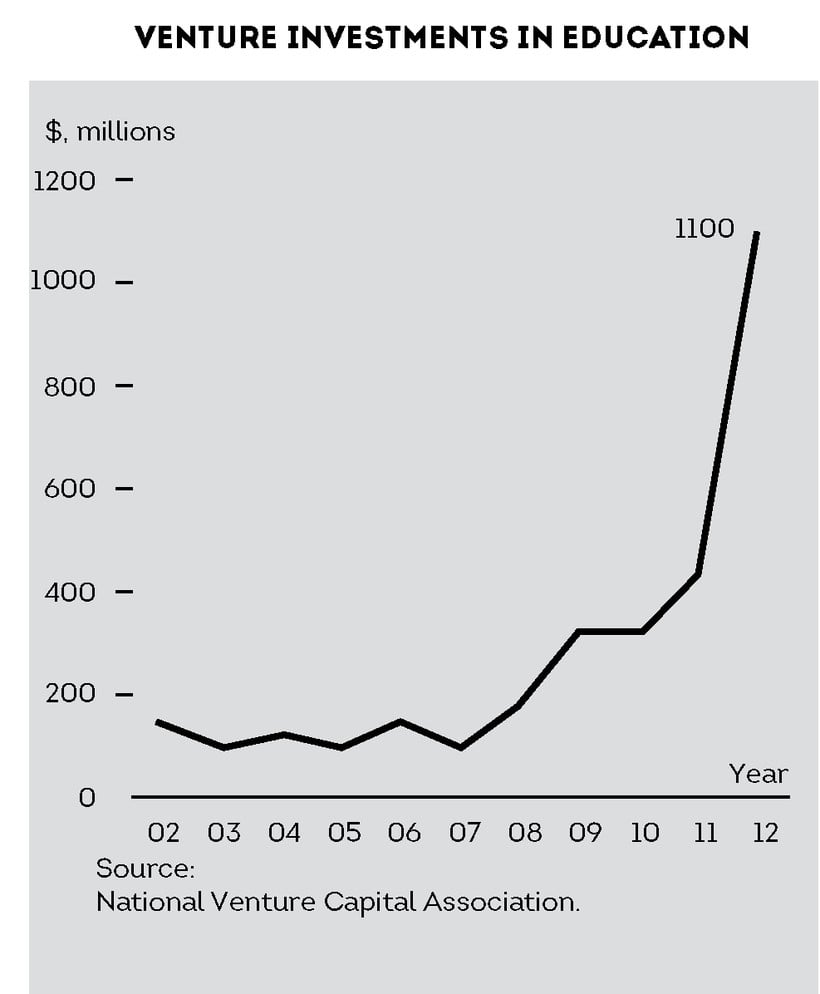 As strange as it may be, the list of the ten academic start-ups that attracted the most investment in 2012 does not include the much-talked-about ‘massive open online courses’ (MOOCs) – Coursera, EdX, etc. The space occupied by EdTech projects is more expansive and diverse than the media has given it credit for. The MOOC phenomenon, often cited today as the poster child for breakthrough innovations in education, is merely the tip of the iceberg.

For instance, a company called Desire2Learn – a leader in attracting the attention of investors – is developing solutions to manage the education process and build lifelong individual learning trajectories. Another company, Open English, offers online English language courses for thousands of clients around the world. Lumos Labs (also known as Lumosity) is the world leader in developing education programmes designed to improve brain performance: the company offers users a chance to unleash their intellectual potential by training memory and attention, for example. Over 45 million users have already registered on the Lumosity website, making it one of the fastest-growing online projects in the world in terms of subscriber numbers.

There are other unorthodox projects that are breaking new ground in the area of education. For example the company Chegg managed to build a successful business offering textbook rental, while the Minerva Project raised $25 million for a new type of education programme in which students study liberal arts using state-of-the-art technologies, studying in a different global metropolis every semester. 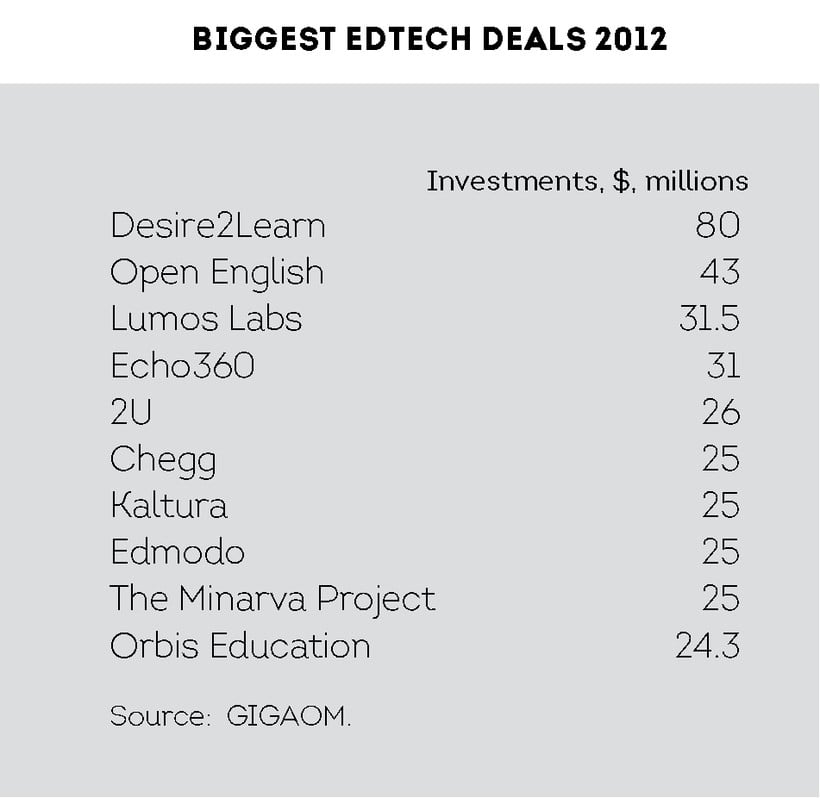 Despite the broad diversity of education projects that raised financing in 2012, they do have a number of things in common:

They target the global market and effective demand, which the traditional education system either fails to see or is incapable of meeting as promptly and efficiently – from the inexpensive convenience of renting textbooks, to entire lifelong learning mechanisms.
They rely on state-of-the-art technological solutions from adjacent areas (primarily computing, commu-nications, and media technologies), which provides a new competitive edge and simplifies and enriches the education process. These solutions include online platforms, social networks, and the ability to analyse large volumes of data.
They either enjoy a cumulative success record (two to five years among the top ten companies), or were founded by people with a name and reputation. (For example, former Harvard University president Larry Summers is on the Minerva Project’s board of trustees.) This helps mitigate the inevitable risks in launching a new product or industry.

Thus, more and more people are opting to channel their energy into creating new solutions rather than fighting old academic models. Supported by investor money, and spurred on by growing media attention, these education start-ups are turning into a mass phenomenon. As opposed to traditional academic institutions, these start-ups have current educational trends on their side: massification, globalisation and digitisation. Thanks to modern technologies, acade-mic start-ups can offer accessible, affordable, mass education for the global market, relying on private capital instead of government or corporate budgets. The threats and challenges faced by traditional players are, in practice, great opportunities and competitive advantages for new teams and projects.

Today we are witnessing a new education space taking shape whose scale and potential justify the talk of a ‘new era’ – a greenfield era – which is likely not only to bring about multi-billion-dollar education businesses, but also transform the tradi-tional education system.

This new era means new and unique opportunities for teams of entrepreneurs, academic institutions, and even entire countries. The best education projects of the next fifty years are probably yet to be conceived. 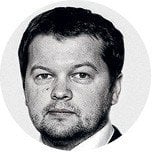