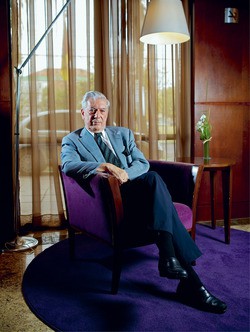 Shaping a demanding and dissatisfied society that would not let itself be manipulated – this is the main objective of culture according to Mario Vargas Llosa, recipient of the 2010 Nobel Prize in Literature. He always has a couple of kind words to spare when it comes to modern-day Latin America, its enterprising middle class, and even politicians. However, as the conversation drifts towards culture that has transformed itself into entertainment – it gets more complicated.

It is no small feat to manage to interview Mario Vargas Llosa. I was put on a waiting list in 2009 when I first contacted his assistant Fiorella Battistini, saying I wanted to discuss the importance of theater in his novels. He seemed to become even less accessible after 2010 when he won the Nobel Prize for literature. “I am asked for so many interviews I’d have to devote my entire life to them,” he says.

But I finally scored the prized opportunity to speak with the 78-year-old, with the interview taking place on 11 April as Vargas Llosa was preparing to head the Peruvian delegation to the Bogotá Book Fair later that month. (It would turn out to be just one week before the death of fellow South American literary legend, Gabriel García Márquez. The two were friends until a falling out in the 1970s that included a fistfight. Vargas Llosa brushed off a question during the interview about García Márquez, but after the Colombian’s death, he said, “A great writer has died.”)

We spoke on the sixth floor of his residence in Lima, with views onto the gray expanse of the Pacific Ocean. He spends summers on this arid coastline, and the rest of the year in Madrid, London, or New York. Politically, he hovers between center and right; he has backed the policies of Peru’s centrist President Ollanta Humala and promoted the presidential aspirations of First Lady Nadine Heredia as his fitting successor. He has spoken in favor of a proposed law to allow civil union between homosexuals and another to decriminalize abortion in Peru, and welcomed the legalization of marijuana in Uruguay.

When Vargas Llosa speaks, he is heard, both here and throughout Latin America. Colombia is of particular interest to him, as is Venezuela.

EL ESPECTADOR: What have all the many revolutions done for Latin America?

VARGAS LLOSA: The revolutions have left us with many dead, injured, a lot of poverty. They have quite notably delayed the modernization process, and unfortunately left us with a residue of grudges and buried violence. All this has delayed, but not impeded, the democratic culture finally taking root. I think the process is today a reality in Latin America. It is deficient because we are still carrying memories of a time when people thought you could bring about social justice with bullets, guerrillas, bombs, terrorism, and kidnapping. Today the problems are of another kind. In a country like Colombia, I have the impression that the problem is much less political and more to do with artificial interests present there, which use the guerrilla and ideological vocabulary when all there is behind them are mafia groups, cartels and drug trafficking.

Don’t you think there has been an evident increase in the gap between the rich and the poor? One only has to go the edges of cities like Lima or Bogotá.

No. I don’t think that is true. Let’s say there are great inequalities, but the central fact about Latin America is not that, but the growth of the middle classes. There may be inequalities but in a positive, not negative sense, because there is more wealth. In Peru’s case, the popular classes may be proving themselves to be more dynamic in creating firms and jobs than the prosperous sector. That explains our countries’ relative stability now compared to the past.

How do you see the peace process undertaken by the government of President Juan Manuel Santos with FARC (Revolutionary Armed Forces of Colombia) in Cuba?

Behind these talks, I see the search for a more or less honorable way out, although I personally have my doubts that it will be successful because it seems to me that there is a very large disconnect. Now if a solution does come and it means the surrender of the guerrillas, it would be welcome. Who believes in the Cuban model these days? Cuba itself is looking for more discreet ways of not being Cuba.

Your essay The Civilization of the Spectacle captures the cultural reality we live in now, but it leaves one with the impression of your defending the status of an intellectual aristocracy against the mass culture that has become popular through the Internet, say, or social networking websites. Why?

There are people who believe that the great audiovisual revolution of our time is for the first time creating a democratic culture. I do not think that is true; what has created this phenomenon is information reaching everyone for the first time, or reaching a formerly inconceivable number of people. I accept this and believe there are many positive elements, like the increasing difficulty of imposing censorship. Technology destroys censorship systems, and that is very positive. But it is a mistake to confuse culture with information. Culture was always and will always be elitist.

Relativism is now so generalized that humanity’s greatest conquest, liberty, could unexpectedly begin to disappear. We face the possibility of a revival of the authoritarian and totalitarian tradition, but in its modern manifestation, the collapse of what culture has achieved throughout history

Hierarchies and differentiation of specialized areas are disappearing and there is an idea today that everything is culture, or nothing is culture. This has created an enormous confusion that is depriving culture of its natural function, which was to create critical and dissatisfied citizens who would not let themselves be manipulated. There is a passivity and conformism now derived from this hugely idealized technology as a cultural pseudo-product. And I think that has serious consequences for society, liberty, and democracy. If culture becomes entertainment and starts to compete with soap operas or the circus, I think that Orwell’s nightmare may start to materialize, with a world filled with top specialists and highly informed but soulless individuals being manipulated by powers that control technology. A supposed scientific revolution that could take us toward dictatorship.

Gao Xingjian, China’s first Nobel Prize winner, recently declared at the Bilbao Festival of Letters that our current crisis is not just economic and financial, but also social and intellectual, because we have become stuck in the ideologies of the 20th century. He said intellectuals from across the world should set in motion a new way of thinking, or a new Renaissance. What should the premise of this 21st Renaissance be?

In this extraordinarily changed world, liberty ends up playing an essential role in peaceful coexistence. We do not have a clear idea of the effects of this technological revolution, which is accompanied by a collapse of all values and beliefs. We no longer know what is good and what is bad, what is beautiful or ugly. These categories are no longer accepted in the great cultural centers. Relativism is now so generalized that humanity’s greatest conquest, liberty, could unexpectedly begin to disappear. We face the possibility of a revival of the authoritarian and totalitarian tradition, but in its modern manifestation, the collapse of what culture has achieved throughout history. 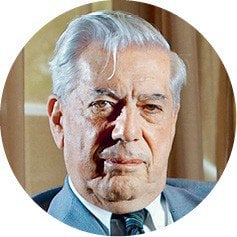 writer, recipient of the 2010 Nobel Prize in Literature