The Next Generation of Latin America’s Top Fortunes 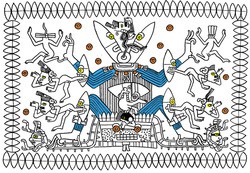 Looking at the heirs of Latin America’s major business families, it is the best and worst of times – but it is just about time for them to take charge.

Eugenio López Alonso remembers the day they took him to visit the palace at Versailles. He was seven, and while other kids that age may have aspired to be astronauts, he began to dream of becoming Louis XIV. Forty years on, the sole heir to Mexico’s Jumex fruit juice empire has become his country’s great patron of the arts, much like the Sun King himself. Forbes magazine once dubbed him the Mexican Medici.

On his 22nd birthday, his father said he could have any present he wanted, and he chose a work of art. Then came an art gallery in Los Angeles. By 2001, he had a collection of 1,485 pieces valued at $80 million, the core of what would become the Jumex collection. In the next decade, Eugenio became Latin America’s most important patron and collector, most recently opening the five-floor Jumex museum in Mexico City.

When the patriarch retires

López Alonso is an extreme case, but illustrates well the public perception of heirs as fascinating, desirable, almost culled-from-fiction personalities. They are also the object of study by management experts who ask: are they good businessmen? Should they enter management, or should such positions go to professionals without blood ties to the founding patriarch?

A study on transitions in family firms by Maximiliano Fernández, Alexander Guzmán, and María Andrea Trujillo of the University of the Andes Management School found that outside management was a boost to productivity. Still, there is no consensus on the question.

Competence and market power acquired by founders are also cited as key productivity factors, alongside the complexity a business acquires in time. Family transitions can, however, come with internecine rivalries and personality clashes. The Costa Rican academic Esteban Brenes notes the problems that come with those founders who want to run their empires to a ripe old age, hindering the rise of competent successors.

A case in point, the Paulmanns of Chile. Horst Paulmann, the 78-year-old founder of a retail empire with interests in five Latin American countries is described as domineering. He has written down ‘the important things’ about running a retail business in a little black book, and is reluctant to let anyone participate in running his holdings. Indeed, he systematically thwarted his eldest son Manfred’s management initiatives in Chile and Argentina, until Manfred resigned his positions and vowed never again to work there while his father was president.

In certain conditions, heirs can increase their firms’ profits – for example, if they can cash in on their good name and reputation. This has happened with the Servitjes, heirs to Bimbo bread and pastries, while observers are closely watching the succession to Mexican telecommunications magnate Carlos Slim, who has already delegated top posts to each of his three sons.

Horst Paulmann has written down ‘the important things’ about running a retail business in a little black book, and is reluctant to let anyone participate in running his holdings. Indeed, he systematically thwarted his eldest son Manfred’s management initiatives in Chile and Argentina, until Manfred resigned his positions and vowed never again to work there while his father was president

Brazil’s Votorantime industrial group now has dozens of third and fourth-generation heirs aged between 18 and 35. In 2001, CEO Antonio Ermírio de Moraes, a grandson of the firm’s founder, decided before retiring that family could only take management positions if they had a proven track record of hard work elsewhere. That policy led some younger members of the clan to become entrepreneurs in their own right, like the 27-year-old Antonio Ermírio de Moraes Neto, founder of the ‘philanthropic’ investment fund Vox Capital.

Founders can write down testaments to lay out how their firms should be run one day, but will the ‘family pact’ last? Horst Paulmann has written that his three children – Peter, Heike, and Manfred – must form a tripartite board to resolve company issues by majority decisions. In this case at least, the three siblings are said to be close.

The Jumex museum opened on 19 November, its inauguration costing a cool $3 million. Eugenio arrived late – three hours late – as is his custom, though 1,500 guests were treated to 1,000 bottles of Moët & Chandon and enjoyed walking on stairs covered with gold leaf. Eugenio López Alonso’s Versailles now houses works by Damien Hirst, Jeff Koons, and Cy Twombly, among other artists.

His father and cousin, meanwhile, work every day to ensure Jumex is not swallowed, like some rivals, by a global drinks giant like Coca-Cola.

Unfair? Possibly, but to each his own, and the López family seems happy with these lines of succession.

Marlene Jaggi contributed to the report in São Paulo, Camilo Olarte in Mexico City, and Luis Mendoza in Santiago.