The Perils of Financial Freedom

The Chinese authorities bank on liberalisation of financial markets, seeing this as a way to overcome the economic threats that are plaguing the country. However, free markets are capable of quickly bringing about an even more acute crisis in the country compared to what the world was facing back in 2008.

Back in 2007, China’s then-prime minister, Wen Jiabao, famously described his country’s economy as “unstable, unbalances, uncoordinated, and unsustainable.” Today, the imbalance remains, with the economy too focused on investment and too dependent on credit.

China’s current leadership is committed to building a more balanced model, and believes that the market must play a “decisive role” in achieving that. But, while stronger market discipline is needed in some areas, Chinese officials should be under no illusion that free markets are a panacea for the financial sector. Indeed, China’s current economic imbalances partly reflect the dangers created by competition in credit markets.

Even before the 2008 global financial crisis, China’s annual investment/GDP ratio was running at an exceptionally high 40%, and economists were calling for a transition to more consumption-led growth. But the huge credit stimulus introduced in 2009 drove the economy further in the opposite direction. The investment ratio rose to 47% by 2012, and construction now accounts for 30% of all output. Total credit has risen from 130% of GDP to 200%, with both bank loans and ‘shadow bank’ credit expanding rapidly.

Both China and the global economy benefited from that stimulus, which helped prop up overall demand in dangerously deflationary times. But it has led to significant wasted investment in heavy industry, real estate, and urban infrastructure, and leaves China facing the challenge of deleveraging and working out bad debts.

In many areas, improved market discipline does have an important role to play in addressing the structural causes of imbalance. Wasteful construction investment is encouraged by the under-pricing of rural land. The lack of a normal ownership relationship between the central government and state-owned enterprises (SOEs) allows the latter to pay minimal dividends and over-invest in business expansion. Caps on interest rates on bank deposits result in household savers supplying a large subsidy to corporate borrowers. And SOEs have better access to credit from state-owned banks than private companies do.

But the belief that financial liberalization will provide an easy route to a balanced and stable economy is a delusion, as Japan’s experience in the 1980s illustrates. As Joe Studwell argues persuasively in his book How Asia Works, neither Japan nor South Korea based its successful economic development on free markets in credit supply; instead, they relied on the deliberate direction of credit toward industrial development rather than real estate or consumption.

When Japan relaxed constraints on its banking system in the 1980s, the result was an enormous real-estate boom and subsequent bust, followed by two decades of slow growth and deflation. China’s per capita income is still only about a quarter of Japan’s in 1990; it would be a tragedy if it suffered a similar setback before completing the path to developed-country living standards.

By the early 2020s, China’s GDP will be $20 trillion. If the credit/GDP ratio reaches 250% by then, total loans and debt securities would equal $50 trillion, which is more than three times the total of US mortgage debt in 2008

One striking feature of the Chinese economy, however, is that real estate and urban infrastructure development – high-rise housing, grand transport projects, convention centers, sports stadiums, and museums – already play a far more important role than they did in Japan and South Korea at comparable stages of economic development.

This reflects the interaction of two distinctively Chinese factors and one inherent feature of all banking systems. The first Chinese factor is the authorities’ focus on ‘urbanization’ as an end in itself, rather than as a byproduct of industrialization. The second is China’s decentralized approach to economic development, with strong competition between regions and cities often focusing on prestigious urban infrastructure projects.

The universal feature in this mix is the fact that banks everywhere can create private credit, money, and purchasing power that did not previously exist, and they have a natural bias, if not constrained by public policy, to allocate it to fund real-estate developments, which drive rising land prices.

These factors will drive construction booms and busts even if obvious market distortions are removed and market discipline is tightened. The pre-crisis Irish and Spanish banking systems proved just as capable as Chinese state-owned banks at funding excessive real-estate construction.

So, even as China introduces greater market discipline to a largely positive effect, it must plan to constrain credit creation with policy tools that were missing in the advanced economies before the 2008 crisis. Caps on loan-to-value or loan-to-income ratios on real-estate loans should be used aggressively. Capital requirements for banks should reflect higher risk weights for real estate lending than banks’ private assessments of credit risks suggest are appropriate.

The People’s Bank of China should maintain reserve requirements for commercial banks to contain credit creation, rather than reject them as old-fashioned, as occurred in the advanced economies in the decades before 2008. Credit provision by shadow banks needs to be tightly regulated. The credit cycle is too important to be left to free markets.

China thus faces a difficult challenge. It must undergo a transition not to the Western model that produced the 2008 crisis, but to an entirely new model that combines elements of market discipline with strong public-policy constraints.

How smoothly that transition occurs matters for the whole world. By the early 2020s, China’s GDP will be $20 trillion. If the credit/GDP ratio reaches 250% by then, total loans and debt securities would equal $50 trillion, which is more than three times the total of US mortgage debt in 2008. Today, much of that debt represents claims within the state sector – owed, for instance, by SOEs to state-owned banks. But, as the private sector develops, SOEs are subjected to hard budget constraints, and the external capital account is opened, this huge credit mountain will create increasing global financial vulnerability.

One hopes that the Chinese authorities understand the dangers as well as the benefits of free financial markets better than advanced-economy policymakers did ahead of the 2008 crisis. If not, another crisis – far more severe than the last – may become inevitable.

Adair Turner is former Chairman of the United Kingdom’s Financial Services Authority, member of the UK’s Financial Policy Committee and the House of Lords. 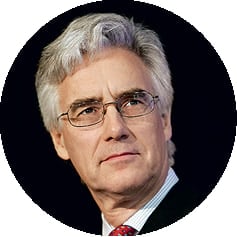